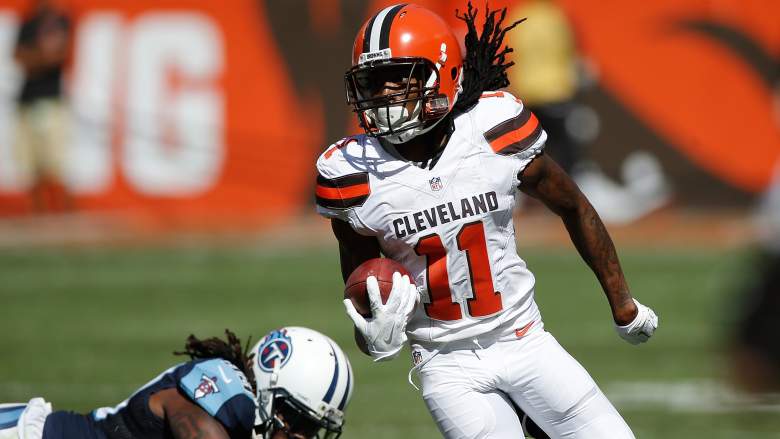 When Travis Benjamin touches the ball, he scores touchdowns.

That’s almost not exaggeration, at least when it comes to his Week 2 performance. The speedy fourth-year receiver caught three passes for 115 yards and two touchdowns. He also had a 78-yard punt return for another touchdown, giving him 29.5 fantasy points in standard leagues and making him what will likely be one of the most popular waive-wire adds this upcoming week.

Travis Benjamin to the house pic.twitter.com/4KjGTFZrlY

Travis Benjamin is the second player in NFL history with 100+ receiving yards and 150+ punt return yards in a game. First was Steve Smith.

On the season, Benjamin now has six receptions for 204 yards. He’s averaging an unbelievable 34.0 yards per reception, and his four touchdowns are tied with Rob Gronkowski for the league lead.

But you shouldn’t use a waiver on him.

The unbelievable efficiency simply isn’t sustainable. While Benjamin is clearly a home-run hitter, he’s not going to average 34.0 yards per reception. He’s also not going to keep scoring a touchdown on every other reception or produce at a consistent rate in a run-heavy offense where he’s averaging just 3.5 targets per game.

In this offense, where there are next to no playmakers in the passing game, Benjamin makes sense as a stash for deeper leagues and leagues that credit return yardage. He has game-breaking ability, and the Browns should find more ways to get him involved.

But the volume simply isn’t there–his career-high for receptions is 18–for him to be a consistent threat. And the likely return of Josh McCown, who isn’t nearly as dangerous as Johnny Manziel (who has thrown all three of Benjamin’s long touchdowns) on deep balls, won’t help, either.

If Benjamin slips through waivers, and you have space on your bench, feel free to give him a shot. But don’t break the bank chasing his production for the first two weeks.

Read More
NFL, Sports
Travis Benjamin had a monster performance in Week 2 vs. the Tennessee Titans. Does that mean you should pick him up in fantasy leagues?