“Due to a tendon tear in the left calf of the IBF/IBO and The Ring Magazine World Heavyweight Champion and WBA/WBO Superchampion Wladimir Klitschko, his championship fight against Tyson Fury will be postponed,” said the press lease from Klitschko’s promotion company.

The highly anticipated bout is expected to serve up fireworks as 39-year-old Ukrainian Wladimir Klitschko (64-3, 53 KOs), who is currently riding a 22-fight unbeaten streak, since his last defeat at the hands of Lamon Brewster in 2004, defends his smorgasbord of world titles, and his legacy, against popular undefeated Brit contender Tyson Fury (24-0,18 KOs). 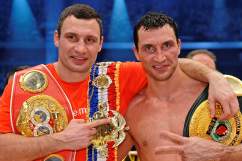 “Especially after the exciting press conference last Wednesday, I was looking forward to this fight very much,” said Wladimir Klitschko. “I know that a lot of fans have already organized their trips to support me in Düsseldorf. I am so sorry that I am not able to fight on October 24.”

No new date has been set for the rescheduled fight, but one is expected to be announced next week. According to Klitschko doctor Dr. Müller-Wohlfahrt: “The boxing fight…should be postponed for an indefinite period of time. Due to this injury we strictly recommend ceasing athletic activity in the next weeks.” 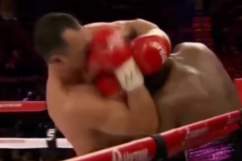 Read More
Boxing
Wladimir Klitschk's world championship fight against Tyson Fury has been postponed due to an injury.