Top ranked super lightweights Lucas Matthysse and Viktor Postol will battle it out for the vacant WBC world title this Saturday, October 3, at the StubHub Center in Carson, California.

“I am excited to be back in Carson,” said Matthysse, who will be making his second appearance at the StubHub Center. “The fans can expect a great fight.”

Read on for a preview and a prediction.

Viktor Postol (R) will be defending his umblemished record on Saturday. (Getty)

Hard-hitting Matthysse (37-3, 34 KOs) enters Saturday’s fight a favorite in Vegas and on online sportbooks. But Postol (27-0, 11 KOs) is a crafty practitioner of the sweet science who knows what it takes to nullify an opponent’s strengths, and he’ll be looking to hold on to his perfect record and to impress on the grand stage of an HBO main event.

Let’s take a look at the betting numbers:

Lucas Matthysse, 33 years old from Argentina, is an aggressive come-forward slugger who carries fight-ending power in both hands. A high-action fan favorite, his all-out style can leave him open to attack and on the mat. But with excellent conditioning, a dependable beard, and a little bit crazy-eyed, la La Máquina can take a beating and keep on chugging along.

Matthysse is coming off hard-earned victories over maulers Ruslan Provodnikov, Roberto Ortiz, and John Molina Jr since his decision loss to Danny Garcia in September of last year. Matthysse wields an 83% KO record and has stopped 8 of his last 10 opponents.

Viktor Postol, a former world champion from Ukraine, is an intelligent boxer who fights behind an educated, serpentine jab and a tight defense. Postol, 31 years old, has good handspeed and knows how to use his legs to cut off the ring put his opponents into position. He has good punch variety, and like Matthysse, he works well to the body. However, his average punching power won’t earn Matthysse’s respect and he better be ready to stick and move if he plans to stay undefeated on Saturday.

“Los Angeles is a second home to me; it’s where my training camp is,” said Postol. “I know that Lucas will have more fans there, but it makes me happy to know I will have support there, too on fight night.”

“Postol doesn’t know it yet but he’s my new favorite fighter,” said Freddie Roach, Postol’s trainer, at a recent media workout. “He works very hard in the gym, does everything we ask and he can bring it. We can win this fight. It is a tough fight but I know we can win, and Postol knows we will win.”

I love this matchup between the slugger and the spoiler. But as much as I am a fan of the Argentine, I will have to go against the betting public and put my money on Postol to utilize his reach advantage (I couldn’t find Postol’s reach, but boasting five inches in height over Matthysse, and a being lanky dude, he must have at least 3 inches more from armpit to fist) to keep the motoring Matthysse at arm’s length, and box and jab his way to a close decision. 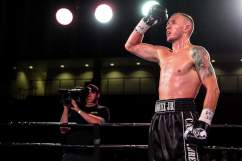