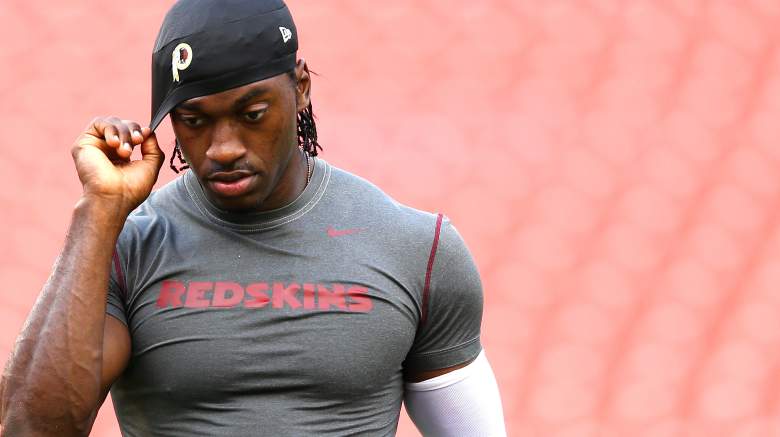 Robert Griffin III will remain on the Washington Redskins roster ahead of final team cuts, according to media reports. (Getty)

The drama of Robert Griffin III and the Washington Redskins will continue for another season, according to reports.

According to NFL Media reporter Jeff Darlington, the embattled quarterback and the team will remain a join unit as squads across the league make cuts for their final 53-man rosters. Darling reported that the Redskins plan to keep Griffin as their second-string quarterback, using him as a backup to recently-announced-starter Kirk Cousins.

There it is RT @JeffDarlington: #Skins plan to keep Robert Griffin III as 2nd-string QB for 2015. He will not be cut. http://t.co/2jq91Omn1R

It’s a move that will surprise just about everyone in the NFL-watching world, but there’s a good chunk of money involved here and Washington seems as if it wasn’t ready to pay. If the Redskins had decided to cut Griffin they would have been forced to absorb a $6.7 million cap hit this season while also still paying him his $3.5 million in guaranteed money. Even if RGIII signed with another team he would have earned that money from Washington.

From that line of thinking, of course the Redskins would keep Griffin on the roster. Except it’s more complicated than that. In reality, Washington is taking a bit of a chance due to a contract clause that says if RGIII suffers any kind of injury that causes him to fail a physical at the end of the year, the Redskins will be required to pay his $16.2 million salary in 2016, regardless of his whether they keep him on the team or not.

NFL Media’s Albert Breer added that Colt McCoy is slated to be Washington’s No. 2 in the season opener as Griffin still has not been cleared to return after sustaining a concussion in the preseason.

In other words, just another day in Washington.