Fantasy owners that drafted San Diego Chargers tight end Antonio Gates in the later rounds of their draft will finally be able to play Gates in their lineup. He is officially active against the Pittsburgh Steelers making his 2015 regular season debut after serving a four-game suspension. If you did not either draft Gates or pick him up early in the season off waivers, he has likely already been snatched up.

For those that already have Gates, the question is whether he is worth starting tonight against the Steelers and his value moving forward. According to FF Today, Gates averaged 9.6 fantasy points last season on 821 receiving yards and 12 touchdowns. Given the inconsistency at the tight end position, Gates has the potential to step in and be a high-end TE1 (top 12 tight end) the rest of the season.

Philip Rivers loves throwing to Gates as the two have spent their careers together in San Diego. Gates averaged just over six targets per game last season.

Ladarius Green has filled in for Gates in his absence and has played relatively well. He has struggled staying healthy and Gates owners should not worry about Green eating into Gates targets. ESPN’s Eric Williams reported that Gates will not be on a limited snap count and is returning to the team in great shape.

Expect Gates to have a great game against the Steelers who are known to give up points against tight ends. Moving forward fantasy owners should start Gates with confidence. 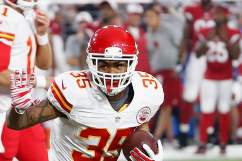 Who Is the Chiefs Running Back to Own in Fantasy?