The hair is now gone, but the smile remains the same: Dan Campbell is the new Dolphins coach. (Getty)

Joe Philbin is out in Miami after four seasons of uninspired football. A talented Dolphins team now faces a two-week break to prepare for a new regime under a new man.

Apparently, the Dolphins won’t have to look far to find that man.

Dan Campbell, former tight end in the NFL with three different teams, will be the new head coach of the Miami Dolphins. Campbell is 39 years old, and last played in the NFL in 2008 with the Lions. He now takes over a struggling but talented Dolphins team, hoping to inject some life into players that are on the brink of giving up for the season.

Here’s some facts about Campbell:

Dan Campbell’s blocking made him a valuable tight end. (Getty)

Dan Campbell played his high school football in Glen Rose, Texas. From there he advanced to Texas A&M, where he developed as a tight end. Campbell wasn’t a flashy pass-catching end, primarily serving as an additional blocker. Campbell also graduated as an agricultural development major.

Here’s Campbell in his own words, talking about his time as an Aggie:

I always thought of myself as somebody that was hard-nosed. I always wanted to be an extension of the offensive line. I always thought of myself as a smaller tackle and I wanted to play that way. I didn’t ever want a defensive end to think that just because he was going against a tight end that he was going to have the better of me. I wanted to prove to myself that I could go toe-to-toe with anybody in the league in the run game and pass protection for that matter. And then if I was called upon to run routes then that’s what I did and I wanted to make the most of that.

Campbell split time all the way up until his senior season at A&M. From there, Campbell took his talents to the NFL, where he had a long and successful career.

Campbell started his playing career with the Giants. (Getty)

Campbell entered the draft following his senior season, and was selected by the Giants at 79th overall. Campbell did the same thing he did in college, but this time it was for Tiki Barber. With Campbell blocking and Barber running the Giants had a solid offense, even appearing in Super Bowl XXXV.

For the 2003 season, Campbell was plucked by Bill Parcells during his reconstruction of the Dallas Cowboys. Campbell played all 16 games his first season, but was sidelined for the 2004 season with a foot injury. After needing an emergency appendectomy before the 2005 season, Campbell appeared in all 16 games, catching three passes on the season.

After 2005 Campbell signed with the Lions, where he enjoyed one of his best seasons as a pro. Campbell was never a statistical juggernaut, but at 30 years old, he set in career highs in 2006 with 4 touchdowns and 308 receiving yards. 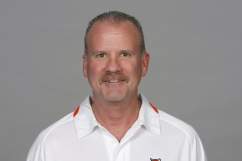 Was Kevin Coyle Fired by the Dolphins?

3. He Has a Super Bowl Ring

Campbell signed with the Saints for his final season, but never appeared in a game. (Getty)

In 2009, Campbell signed with the Saints but was never able to play. He suffered a knee injury in training camp, and spent the season on injured reserve. Luckily for Campbell, the Saints went on the win the Super Bowl.

Having spent the season on injured reserve at 33 and finishing with a ring, Campbell decided to hang it up. Campbell appeared in 114 games during his regular season career, finishing with 934 yards and 11 touchdowns.

4. Campbell Started With the Dolphins in 2010

Dan Campbell could smuggle Joe Philbin out of the building in one of his forearms. pic.twitter.com/HwVJbQAfbQ

After his retirement as a player, Campbell never left the NFL. He signed on at the start of the 2010 season as a coaching intern, spending time with the offensive staff. After the 2010 season, Campbell decided to interview for coching postiions with several teams. He actually interviewed twice with the Cowboys, but eventually elected to remain with the Dolphins as their tight ends coach. Campbell served that role until today, when he was promoted to interim head coach.

In 2013, Campbell spoke about his age’s impact on his coaching:

“The best thing about it is that because I played the game and I’m not really that far removed from it then I can still put myself in their shoes….There are times where they’ll come off and I’ll say exactly what I thought by how I would have played it and it’s dead on. The trap you’ve got to be careful not falling into is as an ex-player you can’t just let everything go and say, ‘Hey, that’s impossible.’ That’s the one thing about coaches throughout the years is you have to identify what players can and can’t do but you can’t just say things are impossible. You’ve got to find a way to get it done. No matter how the job may be, you have to get it done.”

5. His Experience is His Biggest Question

Dan Campbell is a great communicator. He's a good teacher. His units always got better. But what has he ran throughout his life.I don't know

But Dan Campbell is clearly Miami's biggest rising star. They just put him in the microwave and pressed START

The Dolphins buy into none of this. They’ve known Campbell was their future, and are simply speeding up the process. You can’t fire your coach unless you have someone in mind, and Dolphins owner Stephen Ross knew about this move before he fired Philbin. Now Campbell will be tasked with turning around the Dolphins, which have looked apathetic through four week of football. Campbell is a young, inspiring guy, and the Dolphins hope he can breathe new life into the team for the second half of the season and beyond.

Off the field, Campbell is a family man. In the offseason Campbell goes back to Texas, where he resides with his family. Dan and his wife Holly have two children; a son, Cody, and their daughter Piper.