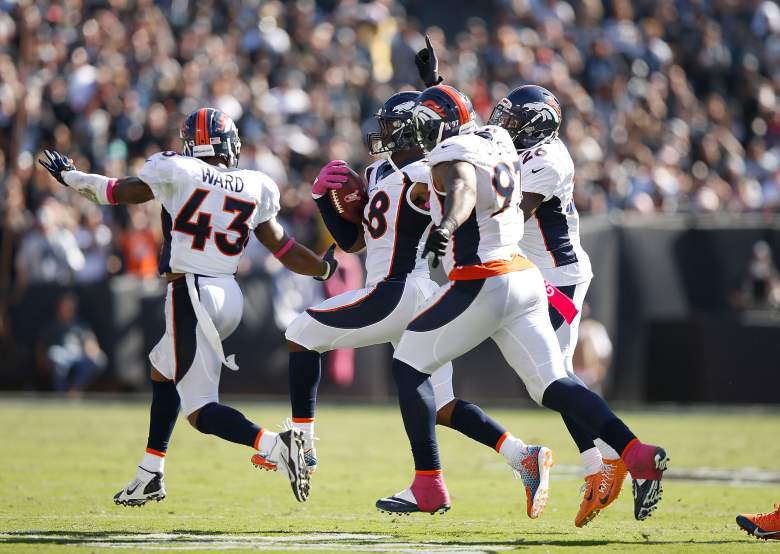 The Denver Broncos remained unbeaten with a 16-10 victory over the Oakland Raiders. Chris Harris, Jr. intercepted Derek Carr and returned it 75 yards for the touchdown. The 4th quarter turnover shifted all the momentum Denver’s way.

The Broncos were again led by their defense. Denver survived two Charles Woodson interceptions on Peyton Manning. Manning was 23-of-35 for 266 yards and no touchdowns.

The Raiders defense had a solid game against the Broncos, but the offense was unable to move the ball consistently. Derek Carr was 26-of-39 for 249 yards, one interception and one touchdown.

The win pushed the Broncos to 5-0 while the Raiders fell to 2-3.

Here are the highlights from the AFC West showdown:

It Was a Scoreless First Quarter

The story was all defense early as the teams finished the first quarter tied 0-0. The Broncos would score a field goal early in the second quarter to make it 3-0.

The Raiders Scored on a Short Pass

Inside the Broncos five yardline, the Raiders went for a play action pass. Carr connected with running back Marcel Reece for the 3-yard touchdown.

Von Miller Came Up With a Strip Sack

Early in the third quarter Von Miller sacked Derek Carr and ripped the ball out of his hand. The fumble recovery led to a Broncos field goal which made the score 7-6.

DeMarcus Ware Was Ruled Out for the Game

DeMarcus Ware will not return for the Broncos because of a back injury http://t.co/H5WGr3Rqhy pic.twitter.com/VcsZOFKY6L

DeMarcus Ware suffered a back injury early in the game. During the third quarter, it was announced that Ware would not return.

Kicker Brandon McManus Scored All the Broncos Points Early On

18 years to get an interception on Peyton? How about two of them? Charles Woodson. pic.twitter.com/N1U5hU1R75

Entering the game against the Broncos, Woodson had never intercepted Manning during his career. He intercepted him inside the endzone as the Broncos were in the redzone right before halftime. His second interception came off a leaping grab in the third quarter.

Chris Harris, Jr. intercepted Carr in the fourth quarter. Harris ran it back 75 yards for the touchdown. The turnover gave the Broncos a 16-7 lead. 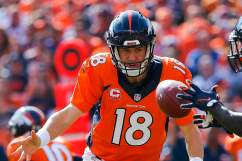 How to Watch Broncos vs. Raiders Live Stream Online