Jarvis Landry has been the lone bright spot for the Dolphins this season. (Getty)

Dan Campbell had the Dolphins ready to play against the Titans. (Getty)

Wow. What a difference.

On defense, the Dolphins went into the game with one total sack for the season. Cameron Wake became the first player since 2012 to record four sacks in a half, and the Dolphins never looked back. They finished with six sacks and four turnovers, including a pick-six in the third quarter.

This, friends, is the largest margin of victory for any #Dolphins head coaching debut in franchise history. #Saban comes closest at 24 pts.

It’ll be interesting to see if the Dolphins can continue this momentum into future weeks. The altered gameplan worked in their favor, but it won’t be long until other teams adjust to the Dolphins’ new style. We’ll see next week, when the Dolphins (2-3) head home to face the Texans. The Titans (1-4), now losers of three straight home games, will try to break the streak against the Falcons.

The Dolphins have been dominating this game today, and they’ve been doing it on both sides.

When you can put pressure on the quarterback, good things happen. The Dolphins have five sacks, and now they have a pick-six. A collapsing pocket forced a quick throw from Mariota, whose pass was jumped by safety Reshad Jones. Jones, accompanied by a handful of blocking Dolphins, took the pass back 30 yards and flipped into the endzone. 24-3 Dolphins.

The Cuban judge gives Reshad Jones a 6 on his dive into the end zone. Get it? TD? A 6?

Dan Campbell is pushing all the right buttons as Dolphins head coach. (Getty)

Miller with 99 yards rushing. Wake with four sacks. Offensive balance. Palpable passion. What a half for the #Dolphins!

Change is happening to the Miami Dolphins.

After a week under interim coach Dan Campbell, Miami looks vastly improved in the first half against the Titans, and they lead 17-3 at halftime. The Dolphins have shown a commitment to running the football, and Lamar Miller has 99 yards and a score at the break.

The impact hasn’t just hit the offense. The Dolphins defensive line has come alive, thanks to a huge half from Cameron Wake. Wake must be at his healthiest this season, because he has looked dominant today. He headed into the break with four sacks and two forced fumbles.

For Tennessee, it doesn’t look good for them in this one. They are getting oushed around on both sides of the ball, and injuries will affect their offense moving forward. Marcus Mariota went down with a knee injury but returned, however starting center Brian Schwenke did not. He was carted off the field, putting even more pressure on Mariota.

Landry with the CR7 celebration https://t.co/S29XmjGnJB

It’s a dream start for the Dan Campbell era.

The Dolphins got a start on the Titans first drive, then marches right down the field for a touchdown. Lamar Miller touched the ball multiple times, and an end-around to Jarvis Landry went for 22 yards and the game’s first touchdown. Landry did a great job keeping his balance and finishing the run for Miami’s first opening-drive TD of the season.

That is the first time the Dolphins score first and lead a game in the first quarter this season.

Statue of Liberty TD for the Dolphins.

Great call, outstanding run by Landry. Dolphins have a running game! Who would have thought? First TD on a first possession this season.

Marcus Mariota has had a solid start, but the Titans are still 1-3. (Getty)

It feels like ages ago we were watching the Dolphins get throttled by the Jets in London. Two weeks have passed, and fans are expecting a slightly different Miami team when it kicks off against the Titans on Sunday.

Joe Philbin has been replaced by burly tight ends coach Dan Campbell. Campbell has gone back to basics with the Dolphins, arranging the locker room by position and encouraging more contact in practice. Hopefully that leads to a more basic offense for the Dolphins, who have run the ball less than any other team in football. The Dolphins are ranked 31st in points per game, and are the worst team in football on third down (27%). What better way to start the turnaround against a young Titans team that is struggling in their own right.

Everything is fine in Tennessee. The coach is good, the defense is good, and the quarterback is the crown jewel of the franchise. There’s just one problem: the Titans aren’t winning any games. And what’s worse, Tennessee has blown it’s fourth quarter lead in front of home fans for two straight weeks. Late interceptions from Marcus Mariota aren’t the biggest problem, it’s the defense letting it’s team down. They aren’t tired; Tennessee controls the ball as good as anyone in the league. If the Titans want to be taken seriously, they need some takeaways. Tennessee has a turnover differential of -2, tied for 17th in the league. 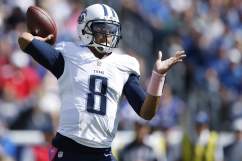