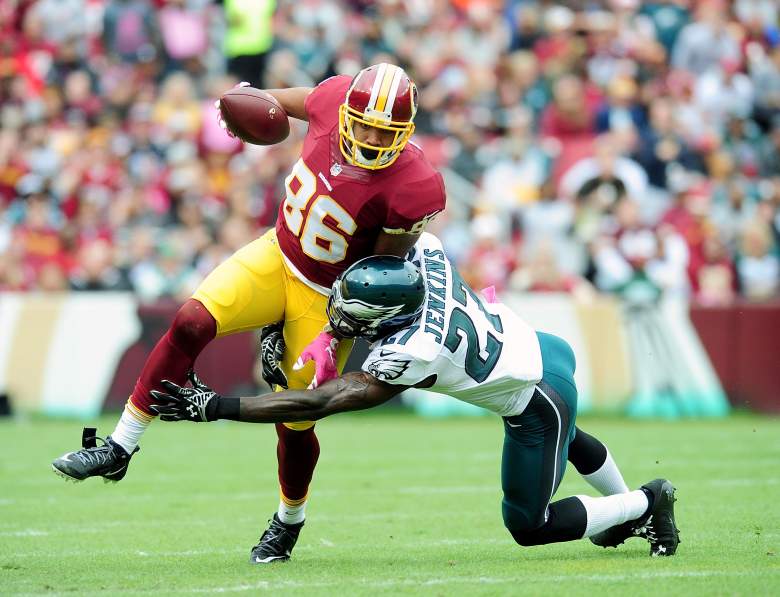 The Washington Redskins staged a late-game comeback drive, capped off by a Kirk Cousins touchdown pass to Pierre Garcon with seconds left on the clock en route to a victory over the Philadelphia Eagles on Sunday afternoon.

The drive, which began at the Redskins own 10-yard line, was the longest game-winning, fourth-quarter drive against Philadelphia in at least 20 years and wrapped up a day that was less-than-ideal for the Eagles.

Once again, Philadelphia’s offense struggled early as Sam Bradford failed to complete a pass in the opening 15 minutes. The Eagles found some rhythm in the second half, however, even taking the lead early in the fourth quarter as Bradford, who finished with 269 yards and three touchdowns, found Miles Austin in the end zone.

The Redskins were not done yet and Garcon, the veteran of a still-injured Washington offense, hauled in a pair of big-time catches, including the go-ahead touchdown pass. Cousins finished the day 31-of-46 for 289 yards and one touchdown and no interceptions.

Gruden on Kirk Cousins: "He's managing the football game, & putting us in a position to win in the fourth quarter. And we finally did that."

Click here to check out a full box score of the game and read on for some of the NFC East tilt’s best highlights:

Pierre Garcon Put Washington Back on Top in the Final Minute

Well, that was one heck of a catch.

We will all probably talk about how Garcon managed to hold on to that ball (and maybe how Kirk Cousins managed to throw the ball to that spot) in the end zone for the go-ahead touchdown catch.

Garcon’s catch, his second impressive haul of the drive, capped off a five-minute long possession for the Redskins that began on their own 10-yard line. In a game where, it seemed, anything was possible, Garcon’s late-game heroics made perfect sense.

Miles Austin Gave the Eagles the Lead in the Fourth Quarter

This has been a game of “huh?” and “really?” and it continued when, in the opening minute of the fourth quarter, Sam Bradford found Miles Austin for a 39-yard touchdown strike. In other words, Sam Bradford does not care about your fantasy team.

Who had the Cooper, Celek, Austin TD pass trifecta?

Bradford must have had one heck of a halftime discussion with himself (and maybe Chip Kelly) because in the second half the Eagles QB had seven complete passes, three of which went for touchdowns.

Brent Celek Tied the Game at 13 With a Philadelphia TD

Yup, you read that right.

After a disastrous first half where nothing went right on either side of the ball, the Philadelphia Eagles tied the game at 13 all with a second touchdown midway through the third quarter.

Sam Bradford was able to evade the sack with just over eight minutes left in the quarter, rolling out to find Brent Celek for the 10-yard score. The Eagles Twitter was pretty psyched and, finally, had a reason to use this gif:

After throwing for just 74 yards in the opening 30 minutes, Bradford had 186 yards through the air midway through the third quarter.

That’s one way to come out of halftime.

Philadelphia, finally, got on the board when Sam Bradford found Riley Cooper on a deep route for a 61-yard touchdown reception in the early minutes of the third quarter. Prior to that pass, Bradford was 0-5 on passes of 20 or more yards.

It wasn’t all highlights for the Eagles, however, as kicker Caleb Sturgis struggled once again, missing the extra point. Sturgis has now cost his squad four points after missing a 33-yard field goal attempt to end the second quarter.

The Redskins Led the Eagles 13 – 0 at Halftime 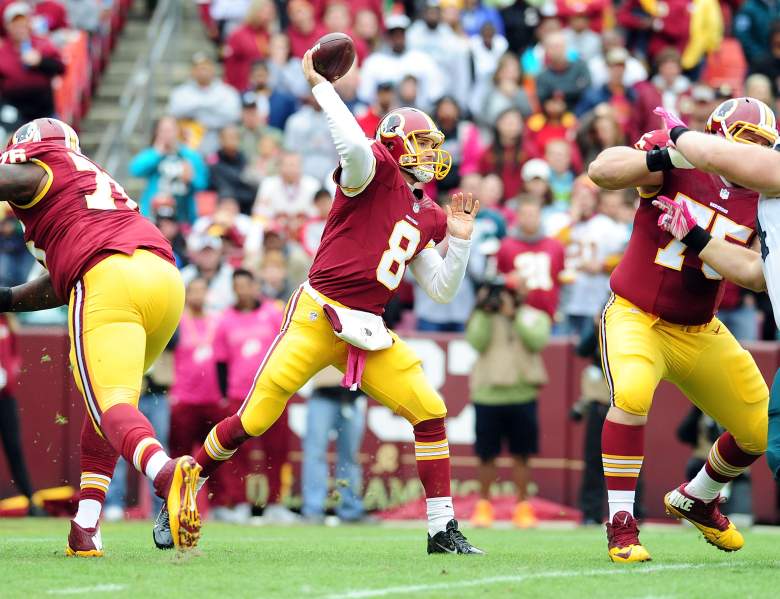 Washington Redskins QB Kirk Cousins threw for over 100 yards and ran for a touchdown in the first half on Sunday afternoon. (Getty)

Kirk Cousins, who ran for the only touchdown of the first half, was 13-of-18 for 109 yards while the Redskins ground game racked up 75 yards, sparked by Chris Thompson’s three carries for 46 yards.

The Eagles, on the other hand, were not quite as statistically successful. Sam Bradford did not complete a pass in the first quarter and finished the first half 5-of-10 for 74 yards. DeMarco Murray was a dim bright spot with 28 rushing yards on three carries; more than doubling his season total.

Wow. HUGE end to the first half for Washington. 33-yard field goal wide left. That's a 13-0 halftime lead for #Redskins.

Still, it was not a good half for Philadelphia. Even a 33-yard field goal went wrong as Caleb Sturgis’ final-second attempt went wide left to wrap up the half.

So this is how Kirk Cousins gets TD's. #PHIvsWAS pic.twitter.com/FJvb7WS0Np

It’s been that kind of day for both sides of the matchup as Washington Redskins quarterback Kirk Cousins fumbled the snap, recovered the ball and scored a touchdown. Naturally.

Kirk Cousins fumbles the snap, but picks it up for the 1-yard TD. First rushing TD allowed this season by the #Eagles. Play is under review.

The play stood despite the review and the Redskins continued to dominate nearly every statistical category on the afternoon. With just over five minutes left in the half, Cousins had thrown for 107 yards while Washington had out-gained the Eagles 183-to-74.

The Redskins defense followed up the Cousins one-yard run into the end zone with a fumble recovery as Philadelphia tried to get vaguely fancy with a reverse in the backfield.

Redskins have held the ball for 12 minutes, 59 seconds. Eagles just one minute, 20 seconds.

Washington’s offense was ground-and-pound in the early stages of the NFC East tilt, controlling possession almost entirely in the first quarter.

In fact, with just 51 seconds left in the first quarter, Sam Bradford had attempted one pass and Ryan Mathews had one rushing attempt for a whopping zero yards.

The Redskins offensive gameplan ended in a pair of field goals as Dustin Hopkins split the uprights.

Hurricane Joaquin is expected to make landfall on the east coast this weekend, making the playing conditions at FedEx Field more than just a bit sloppy. As with  most weather predictions, it’s still unknown if Joaquin will directly hit the D.C. area on Sunday but the expected rain and wind from the storm will likely have an impact on how the game is played.

The weather, no matter how bad it is, will most likely turn this into a ground-and-pound type of game with both squads focusing on their respective run games. The Redskins are fourth in the NFL on the ground, averaging 143.7 rushing yards per game. Philadelphia, meanwhile, is 30th in the league with just 64.3 yards on the ground each game.

“If it is what they say it is, then there won’t be many balls in the air, that’s for sure,” Redskins coach Jay Gruden told the Washington Post. “That is what we want to be. We want to be a physical football team, obviously.”