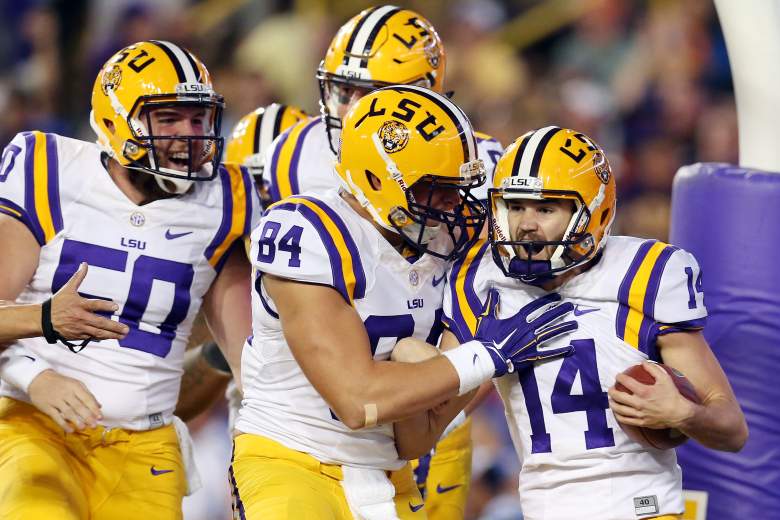 It was a typical LSU and Florida game Saturday night in Death Valley. There were fake field goals, long touchdown passes and punts returned for touchdowns. Ultimately, the Tigers were victorious as two of the best teams in the SEC squared off.

It was fitting that LSU ultimately won the game on a fake field goal. The game was tied at 28 when LSU converted the fake field goal midway through the fourth quarter. It turned out to be the last score of the game.

Florida hung with LSU the entire night and had a legitimate shot to win the game. Quarterback Treon Harris looked good behind center but was not able to make enough plays in the fourth quarter. He was 17-of-32 for 271 yards and two touchdowns in a losing effort.

Here is how LSU defeated Florida:

A Muffed Punt Set Up a Gators Touchdown

TE Jake McGee had 18 catches for 157 yards and a touchdown prior to that play. Huge 4-yard TD catch for #Florida early at #LSU.

Florida took advantage of muffed punt and a few plays later scored on a touchdown pass. It gave the Gators a 7-0 lead early in the first quarter.

Fournette Found the Endzone and Tied the Game

LSU answered with a Leonard Fournette touchdown early in the second quarter. The score tied the game 7-7.

Harris Threw a Touchdown Pass to Take the Lead

Brandon Harris found Malachi Dupre in the corner of the endzone for an LSU touchdown. It put the Tigers up 14-7.

After Fournette scored another touchdown for the Tigers, the Gators responded with their own touchdown. After the amazing one handed catch by Antonio Callaway, Treon Harris connected with Jake McGee for his second touchdown of the game. The touchdown brought Florida within seven points.

Back breaker…Harris hits Malachi Dupre on a 50 yard touchdown pass with 15 seconds left in the half. LSU leads 28-14.

Late in the second quarter, Harris avoided two Florida defenders in the backfield and threw the ball up to Malachi Dupre for a 50-yard touchdown pass. It marked Dupre’s second touchdown of the night. It gave the Tigers a 28-14 lead heading into halftime.

Kelvin Taylor Scored a Touchdown Early in the Third Quarter

Taylor put the Gators back within seven points with a little over eight minutes remaining in the third quarter. The Gators continued to hang around despite being down throughout the game.

Callaway Tied the Game on a Punt Return

Callaway came up with some massive plays for the Gators. This punt return tied the game late in the fourth quarter.

LSU Won the Game on a Fake Field Goal

Les Miles was up to his old tricks. The Tigers lined up for a short field goal but the backup quarterback pitched it to the field goal kicker who ran it in for the 16-yard touchdown.

Read More
College Football, Football
No. 6 LSU held onto a victory against No. 8 Florida in a Saturday night SEC showdown. We have the highlights, stats and analysis from the game.