Greyson Lambert lives an interesting life. From being the starting quarterback at both Virginia and Georgia to dating Miss Georgia, there is never a dull moment for Lambert. Utilizing the NCAA’s graduate transfer rule, Lambert decided to enroll in graduate school at Georgia and won the starting quarterback position. Bulldogs fans hope the Georgia native can be the missing piece to propel Georgia to an SEC championship.

Lambert’s life revolves around football, family and his girlfriend, Adeline Kenerly. Get to know more about the man behind center for the Georgia Bulldogs.

Here’s what you need to know about Georgia quarterback Greyson Lambert:

Lambert is dating recently crowned Miss Georgia Adeline Kenerly. Kenerly was crowned during halftime of the Georgia and Alabama game in Athens. She also is attending the University of Georgia and studying journalism.

Enjoying two fantastic days in the sun with my two favorite boys @Greyson_Lambert and Knox! http://t.co/qFYJ2ZfE90

2. Lambert Was the Starting Quarterback at Virginia Last Season

Lambert took advantage of an NCAA rule that allows graduated players to enroll at a different university for graduate school in a specialization not previously offered at their prior school. Under this rule, he is able to have two additional years of eligibility at Georgia and was eligible to play immediately after his transfer.

Last season, Lambert threw for 1632 yards, 11 interceptions and 10 touchdowns in nine games. Injuries prevented him from playing more during the season. Lambert has played even better in his short time at Georgia.

Georgia was one of many teams that recruited Lambert in high school. According to Yahoo Sports, he was a three-star recruit out of Wayne County High School in Georgia. He received offers from Auburn, Clemson, Mississippi State and Alabama. At 6’5″ and 195, Lambert offered the size and skills appealing to many teams.

Ultimately, Lambert committed to Virginia. He would finally return to his Georgia roots as a graduate student. Lambert chose Georgia over other schools like Florida who was also recruiting Lambert the second time around.

4. Lambert Grew Up an Alabama Fan 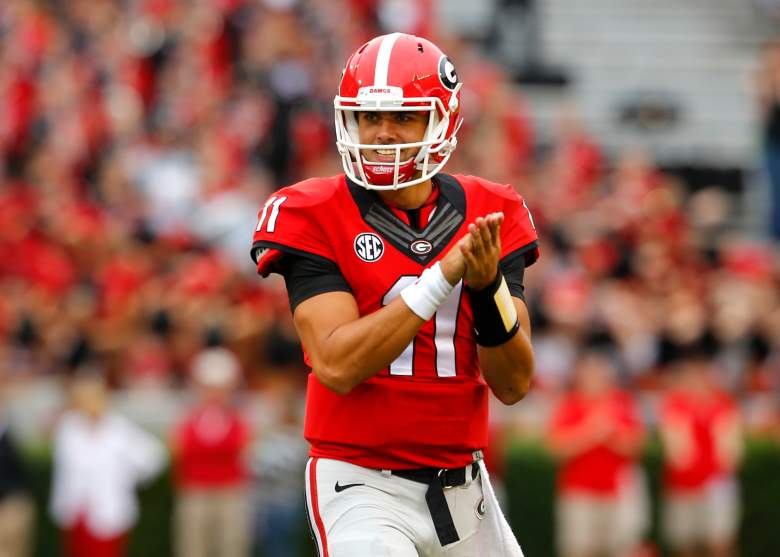 Greyson is the starting quarterback for Georgia. (Getty)

While many will connect Lambert to the obvious storyline of coming home to play for his favorite university, it is not true. According to the Atlanta Journal Constitution, he was born in Mobile, Alabama and moved to Georgia at a young age.

However, Lambert continued as a Crimson Tide fan even while living in Georgia. The first time he went to a game in Athens was when he was being recruited by the Bulldogs in Athens. Lambert saw the opportunity to have a good chance at winning the starting quarterback position at Georgia and made the decision to transfer. He called the move a “career decision” in the interview with the Atlanta Journal Constitution.

5. Lambert Is Very Close With His Younger Sister

#TBT to fall Saturdays and seeing this sweet girl.

He is active on social media and frequently posts photos with his sister on his Instagram account like the above photo. According to Dawg Nation, there is a 12 year age difference between Greyson and Adason. The gap in ages has not prevented the two from becoming close.

Aside from his social media posts, Greyson attends Adason’s baton twirling competitions. Their father, Drexel, is an engineer while their mother, Melony, is a stay-at-home mother.