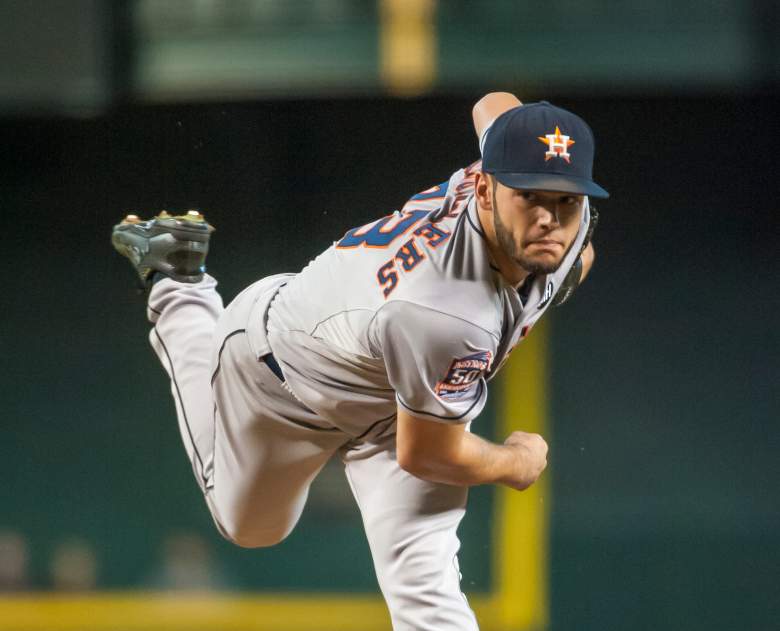 Houston Astros rookie pitcher Lance McCullers gets the start as his team tries to clinch an ALDS series victory on Monday. (Getty)

Dallas Keuchel is still perfect and the Houston Astros are one win away from keeping their improbable postseason hopes alive.

Keuchel remained undefeated at Minute Maid Park on Sunday afternoon, pitching seven innings to lead Houston to a 4-2 victory over the Kansas City Royals and take a 2-1 lead in their Division Series.

Now, the Astros look to clinch the series on Monday afternoon as Kansas City, the reigning AL champs are desperate to stay alive. Lance McCullers gets the call for Houston. The rookie right-hander faced the Royals once this season, giving up just four hits over seven innings of one-run ball with six strikeouts on June 29.

The Astros offense has continued to connect well at the plate, sparked by Chris Carter who connected on a single, double and home run on Sunday afternoon. He didn’t have a three-hit game in all of the 2015 regular season.

Yordano Ventura will get the ball for Kansas City, heading back to the mound after his Game 1 start was shortened by a rain delay. The right-hander allowed three runs on four hits in the Royals 5-2 loss last week.

First pitch for Game 4 is slated for 1 p.m. ET and is being broadcast nationally on FS1. Don’t worry if you aren’t near a TV, here’s how to watch the game online and on mobile:

How to Watch Royals-Astros Online

MLB.tv also costs $9.99 for the playoffs, and it allows users who are able to authenticate a cable subscription with a log-in and password to watch the live broadcast online.

How to Watch Royals-Astros on Mobile

Read More
Baseball, Houston Astros, Kansas City Royals, MLB
The Houston Astros, the little team that could this season, could clinch a berth to the ALCS with a victory on Monday afternoon. Here's how to watch.