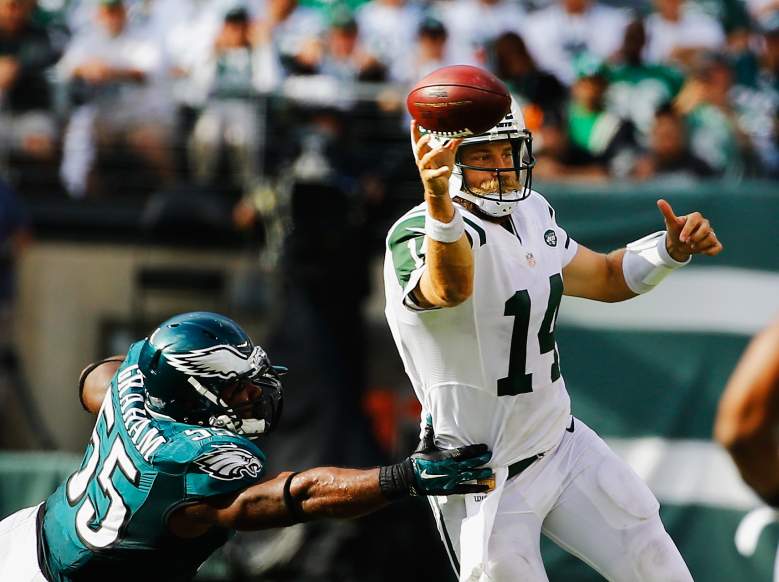 Ryan Fitzpatrick threw a lot against the Eagles last week, and it did not work. (Getty)

Miami Dolphins head coach Joe Philbin is in the hot seat just four weeks into the NFL season, and if he doesn’t deliver a win in London against the Jets on Sunday, he may be unemployed by the time gets back to Heathrow Airport.

Philbin is 24-27 in three-plus seasons in Miami, but with the addition of Ndamukong Suh and the maturation of Ryan Tannehill, most expected the Dolphins to compete for a playoff spot. A sloppy win over the Redskins was followed by defeats to the Jaguars and Bills, making Week 4 a must-win against their AFC East rivals.

The Jets, who are 2-1 ATS this season, are listed as 1 point favorites against the Dolphins at sportsbooks monitored by OddsShark.com. New York is coming off its first defeat of the season; a 24-17 home loss to the Philadelphia Eagles in which they fell behind 24-0.

The Jets enter the game 5-1 ATS in their last six games, but 5-13 straight up in their last 18. They easily covered the spread in defeating the Browns in Week 1 and the Colts in Week 2. The Jets have allowed 13.7 points per game, good for first in the NFL.

The Dolphins are 1-7 ATS in their last eight games, and dropped to 1-2 after being humiliated at home against the Bills last weekend. In losing 41-14, the Dolphins gave up 428 total yards while Tannehill threw a trio of interceptions that put them in a hole early.

OddsShark’s predicted score calculator has the Dolphins holding a 25.6-19.6 edge, far greater than the 1-point spread set by oddsmakers.

The Jets and Dolphins have split the last 10 meetings dating back to 2010.

The total for Sunday afternoon’s Jets vs. Dolphins betting matchup is set at 42.5 points at the sportsbook.