Landry Jones is preparing to start this week against the Chiefs. (Getty)

What do Andy Dalton, Aaron Rodgers, and Peyton Manning have in common?

They’re all on their bye week, forcing many fantasy owners to scramble for a replacement. There aren’t many options, but a rash of injuries to quarterbacks has opened the doors for some new names.

Steelers backup Landry Jones single-handedly turned the game around last week against Arizona, throwing for two touchdowns in two quarters of action. Jones is the third-string QB, and is preparing to start if Ben Roethlisberger isn’t fully recovered from a knee injury. Unlike previous backup Michael Vick, Jones has spent multiple years in the Steelers offense. This is a tremendous advantage for backup quarterbacks, and will allow Jones to use all of the Steelers’ weapons.

After studying tape on @MikeVick @LandryJones12, no question Landry should start. He throws with anticipation, a must in the #nfl.

Roethlisberger participated in drills Wednesday, and is leaning towards playing Sunday. If he cannot, Jones would be a solid streaming option vs. Kansas City. If Roethilsberger plays, there are still other backups to fill your roster this week.

#Texans coach Bill O’Brien tells reporters at his press conference that he’s “going to stick with” Brian Hoyer, who got a game ball.

Brian Hoyer didn’t start the season as a backup, but he’s getting his second turn as the Texans starting quarterback. Hoyer is currently owned in just 9.4 percent of ESPN leagues, and would be a strong start in the Texans’ pass-heavy attack. Hoyer has the benefit of throwing to DeAndre Hopkins, who has already racked up 726 receiving yards this season. Hoyer is up against a Dolphins defense that looked re-energized last week, but should put up acceptable numbers from sheer play selection.

Phrase I never expected to hear: "The conference call with Cowboys starting quarterback Matt Cassel is about to start."

We’ve seen Hoyer and Jones this season, but Matt Cassel will make his Dallas Cowboys debut this week against the Giants. Cassel was traded to Dallas from Buffalo in late September, and has taken first-team reps with the Cowboys over the bye week. Cassel, whose wife had a baby boy over the weekend, started just three games last season before being benched for Teddy Bridgewater. 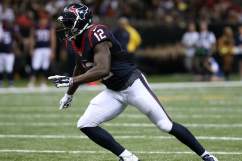 Read More
Fantasy Football, NFL, Pittsburgh Steelers
Landry Jones may start week 7 against the Chiefs if Ben Roethlisberger isn't healthy enough to play. After a strong half against the Cardinals, he may be worthy of a spot start.