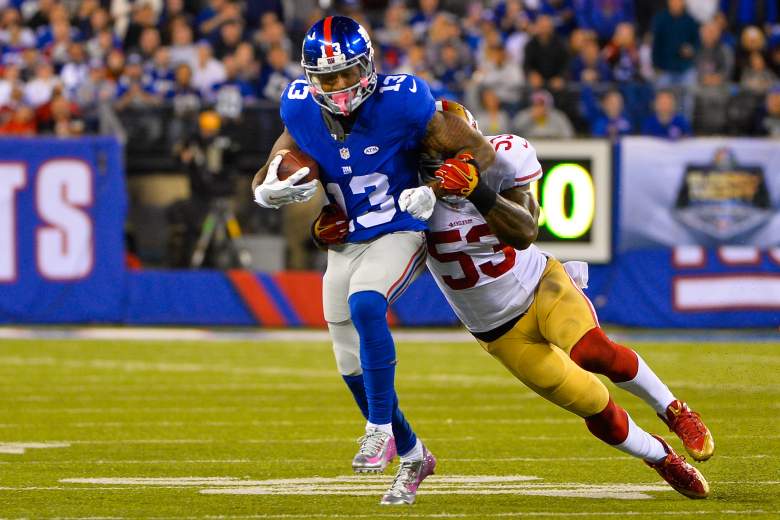 Odell Beckham Jr. is expected to play on Monday night as the New York Giants take on the Philadelphia Eagles in an NFC East tilt. (Getty)

Odell Beckham Jr. will play on Monday night, according to multiple reports.

Despite reaggrivating a hamstring injury in the New York Giants victory over the San Francisco 49ers last week, Beckham is still expected to be able to get onto the field for Big Blue’s big-time matchup against the Philadelphia Eagles. Beckham, who traveled with the team to Philadelphia over the weekend, is officially listed as questionable for the NFC East tilt.

Beckham didn’t practice for the majority of the week leading up to Monday night’s game and although an MRI showed some swelling in the hamstring area, the wide receiver remained optimistic that he would be able to play.

He also posted this on Instagram on Monday afternoon:

Still, the Giants need to be careful with Beckham, particularly in a game that will decide first place in the NFC East. The team will monitor their star wide receiver throughout warmups and game-time temperatures will impact the final decision on his ability to play. It’s expected to be in the 40s throughout the game.

Of course, this is not the first time Beckham has battled his hamstring.

The reigning Offensive Rookie of the Year missed all of training camp and the first four games of the 2014 season with a hamstring injury as well as the bulk of this year’s OTAs and the entire June minicamp.

Beckham leads the Giants with 31 catches, 428 receiving yards and three touchdowns this season. Without him, the squad would be forced to lean more on Rueben Randle (also questionable with a hamstring injury of his own) as well as Dwayne Harris and less experienced receivers Geremy Davis and Myles White. In other words, it would certainly benefit New York to get Beckham out on the field.