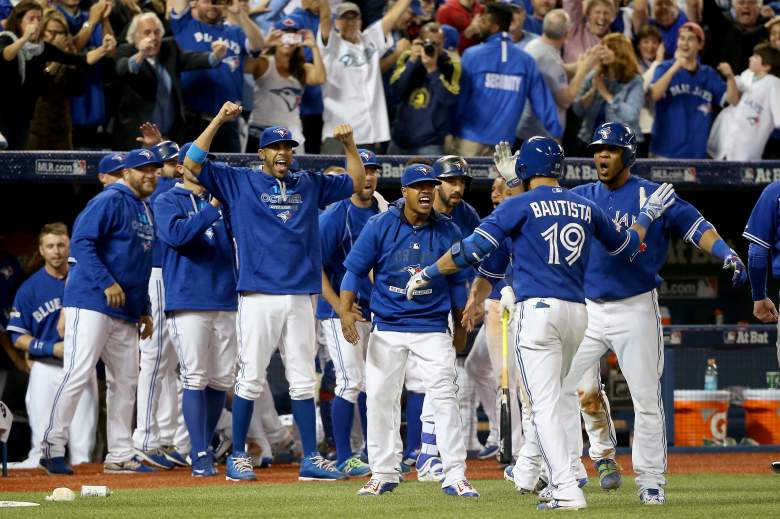 The Toronto Blue Jays are going to their first ALCS since 1993 thanks, in large part, to a three-run HR from Jose Bautista. (Getty)

For one inning of postseason, must-win baseball. So, yeah, that was pretty exciting.

It all started when Rougned Odor scored for the Texas Rangers on a botched throw from Russell Martin back to the mound in the top of the seventh.

The play was ruled a live ball and Odor scored. The entire stadium lost its collective mind. Garbage was thrown, reviews were made and the game is now being played under protest. You can read all of the reasons why Odor was safe right here.

Then, the bottom of the inning happened. The Rangers made three errors on three straight plays to load the bases with no outs and Toronto took advantage, tying up the game on a fielders choice before Jose Bautista went yard with a three-run shot to give his squad its first lead of the game. Look at this bat flip:

Suffice it to say this was possibly the most epic seventh inning in quite some time. The benches cleared twice, people were kicked out of the stadium and there were people cleaning up trash in the outfield.

You doing ok, entire country of Canada? Have you come down from that hit yet? Because the actually hit is probably still somewhere on its way to the moon.

Edwin Encarnacion had never hit a postseason home run before so the designated hitter figured it might be a good time to get going in the bottom of the sixth inning. His shot off of Cole Hamels landed in the third deck of the stadium and, let’s be honest, Encarnacion knew it was a homer as soon as he felt bat hit ball.

The @BlueJays are on the board! @JoeyBats19 drives in @BenRevere9 to cut the deficit to 1! #ComeTogether

…And the entire of Toronto collectively lost its mind.

With one out, Bautista drove in Ben Revere with a double to left field, cutting the Texas Rangers lead in half. Check it out:

This is not the play, but it should be watched because it’s probably how Bautista was feeling as he was sliding into second:

CHOOOOOOO with the long ball to make it 2-0, Rangers!! #LetsGoRangers

The Rangers right fielder drilled a home run to deep right in the top of the third inning to pad Texas’ lead and taking advantage of some hanging pitches left over the plate by Toronto Blue Jays starter Marcus Stroman.

Stroman, who had torn his ACL earlier this season, was having some early trouble with power. The left-hander threw 51 pitches in his first three innings on the mound.

It wasn’t much of a hit but it was enough of a hop to give Delino DeShields a chance to sprint down the third base line.

Rangers strike first!! DeShields swipes the plate on a Fielders Choice for Fielder. Rangers 1, Blue Jays 0 in the 1st. #LetsGoRangers

DeShields had gotten on base after ripping a lead-off double off the wall in the top of the first inning.

Things are about to get fun here. The Toronto Blue Jays look to keep their postseason dreams alive while the Texas Rangers look to bounce back with a series-clinching victory after two straight losses.

Cole Hamels will get the start for the Rangers, looking for his second ALDS win, bolstered by his strong performance in the postseason. In 14 career playoff starts, Hamels is 7-4 with a 3.05 ERA. He went 4-0 with a 1.80 ERA in five starts during the Philadelphia Phillies 2008 title run. In other words, Hamels is used to the spotlight.

On the flip side, the Blue Jays are putting the ball in the hand of second-year right-hander Marcus Stroman, adding another to chapter to his improbable comeback this fall. Stroman returned to the rotation in September after tearing his ACL in the spring.

Now, Stroman will look to help make history in Toronto on Wednesday. Only two teams in 29 tries have lost two games at home to start a division series before rallying to win – the 2011 New York Yankees and 2012 San Francisco Giants.