The little men take the big stage this Saturday when number one pound-for-pound ranked Roman Gonzalez puts his WBC flyweight world title, and his perfect record, on the line against Brian Viloria at Madison Square Garden in New York City.

Continue reading for your details on the favorite to win the fracas, a preview, and a prediction.

Odds to Win and Favorite

Roman Gonzalez (43-0, 37KO’s) enters Saturday’s 112-pound championship fight as a solid favorite in Vegas and on online sportbooks. But make no mistake, while some say Brian Viloria’s best days are behind him, the Hawaii native is as hard as nails, and he may present ‘Chocolatito’ his biggest test yet. With the power Viloria (36-4, 22KO’s) wields, a puncher’s chance is all he may need to pull a major upset this weekend.

“I know that Brian Viloria is an excellent champion and he is a great fighter,” said Gonzalez during a recent media conference call. “He is a tough opponent and it will be a hard fight. I have my arsenal and he has his arsenal and whoever is in the best physical condition on October 17 is going to win the fight.”

Keep reading for a preview of what to expect, followed by my prediction for the fight. 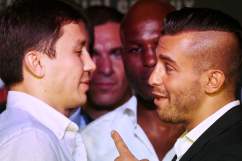 Due to the lack of stateside interest when it comes to the lighter weight divisions of boxing, Roman Gonzalez’s prodigious talent has flown under the radar of the casual fight fan. But thanks to a recent push by HBO to make the Nicaraguan a household name, Gonzalez now finds himself poised to be one of the breakout stars of the post-Mayweather era.

“It definitely motivates me to be able to fight at Madison Square Garden and HBO is giving me the opportunity,” said Gonzalez. “And I need to perform well so that HBO continues to give me the opportunity to fight the best fighters.”

Roman Gonzalez, 28 years old, is coming off a second-round demolition of Edgar Sosa in May of this year. Going into the Sosa mugging, Chocolatito had taken out a battle-worn Valentin Leon after three dominating rounds, and had dazzled over Rocky Fuentes and Akira Yaegashi in 2014.

A boxer-puncher of the highest caliber, Gonzalez presents a complete fighter and seems to do everything well in the ring. Beautiful ring movement (you have to see how this guy makes his way around the ring), supreme generalship, brazing hand and foot speed– all backed up by knockout firepower in both guns. Gonzalez has yet to be exposed in any way and appears to be getting better with every match.

Watch as Chocolatito administers his brand of sweet mayhem on Akira Yaegashi:

Brian Viloria, a 34-year-old former four-time world champion in two weight divisions, was last in the ring with a first-round body-shot win in his rematch versus Omar Soto in July. Going into the Soto encounter, Viloria had stopped Armando Vazquez in December and kayo’d Jose Alfredo Zuniga in July of last year.

“The styles make the fights,” said Viloria. “A lot of people know that it is going to be an action packed fight and a lot of people gravitate towards that.”

An aggressive boxer-puncher, “The Hawaiian Punch,” has been criticized for issues with stamina and focus as matches progress into later rounds. Viloria has been through many a battles, a win drought, and times of inconsistency. Going up against Gonzalez– a pound-for-pound bruiser/tactician working at the top of his game– Viloria will have to pace himself well, somehow put Choco on his back foot, and outfight, arguably, the best in the sport.

“I want it more,” said Viloria. “I have preparing myself for this type of event. I have been wanting this for this so long. I have so much more fire now.”

Before my prediction, check out Viloria’s delicious liver-shot win over Omar Soto:

Photographs and videos of recent Viloria workouts show a sharp and motivated version of the hard warrior. He really does have a granite chin and seems to be focused on the task ahead of him.

But Gonzalez has looked absolutely unstoppable lately– head-and-shoulders above all current competition. I don’t expect this to change on Saturday.

I see the two combatants squaring off in the middle of the ring, while each try to establish their dominance and put the other on the defense. Once quickly establishing who’s boss, look for Choco to dominate his way to a mid-round stoppage behind a high pressure attack.