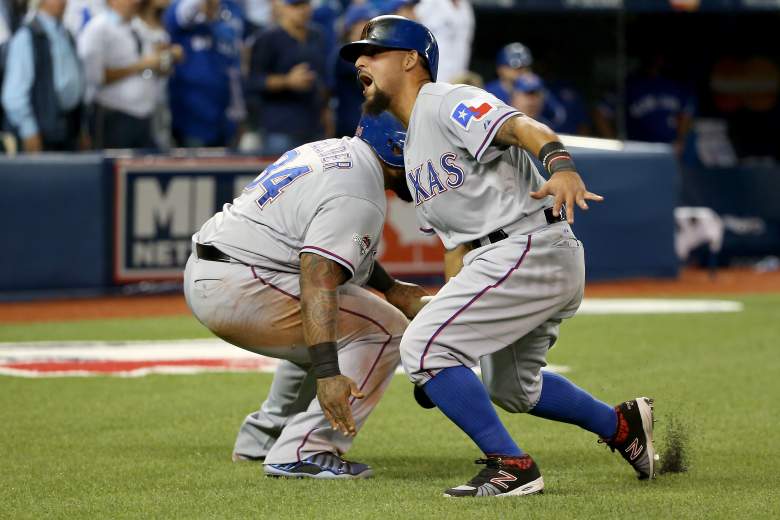 Rougned Odor celebrates after notching one of the strangest plays in MLB history in Game 5 of the ALDS. (Getty)

First of all, this was a really good play by Rougned Odor.

We all good on that? Ok. Good. So, why exactly was Odor safe? As soon as Russell Martin’s return throw to the mound hit off of Shin-Soo Choo’s bat, it was a live ball and Odor was free to run to home. That’s exactly what he did:

Now, the biggest issue with the play was that the home plate umpire called the ball dead while Odor was sprinting down the third base line. The umpire was wrong. Odor, however, never gave up. He kept running to home and, after an 18 minute review, he scored.

What a job for Odor there to be alert and break for home.

Let’s go to the rule book for some more information, shall we? Deal. This is MLB rule 6.03 (a) and it is important:

If the batter interferes with the catcher, the plate umpire shall call “interference.” The batter is out and the ball dead. No player may advance on such interference (offensive interference) and all runners must return to the last base that was, in the judgment of the umpire, legally touched at the time of the interference. If, however, the catcher makes a play and the runner attempting to advance is put out, it is to be assumed there was no actual interference and that runner is out-not the batter. Any other runners on the base at the time may advance as the ruling is that there is no actual interference if a runner is retired. In that case play proceeds just as if no violation had been called. If a batter strikes at a ball and misses and swings so hard he carries the bat all the way around and, in the umpire’s judgment, unintentionally hits the catcher or the ball in back of him on the backswing, it shall be called a strike only (not interference). The ball will be

Choo never got in the way of Martin’s return throw back to the Blue Jays pitcher. It was just a bad throw by Martin. That’s why, after all of this, he was given an error for the play. So, Choo stayed in the batters box, Odor made a heads up play and the Texas Rangers took a one-run lead in the seventh inning of a must-win game.