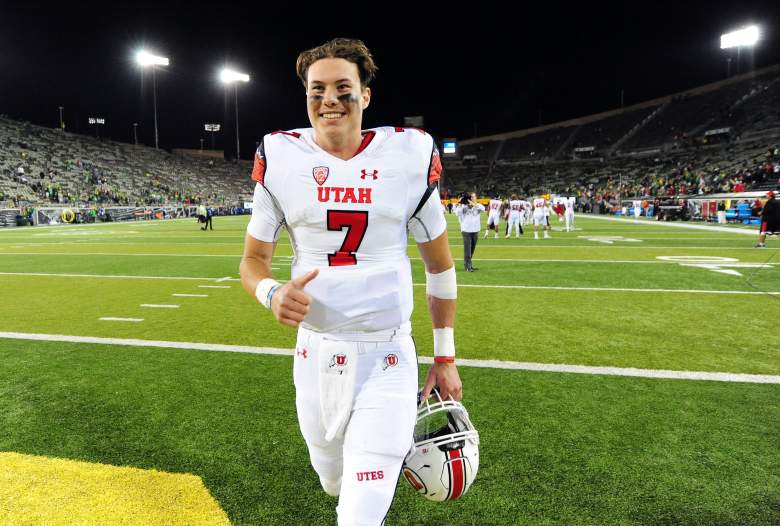 Utah Quarterback Travis Wilson has jumped into the national spotlight after leading the Utes to a victory over Oregon. (Getty)

Travis Wilson has faced just about everything in his college football career.

The Utah senior has battled back from injuries, suffered criticism from every angle and, now, has the Utes in the national conversation for the first time in years. He’s also playing better than he ever has.

Wilson is racking up program records in his final year on the college gridiron and has the Utes on the move, climbing the rankings after some dominant early-season victories. Here’s what you need to know about Wilson and his career under center:

1. Wilson is a Four-Year Starter With Utah 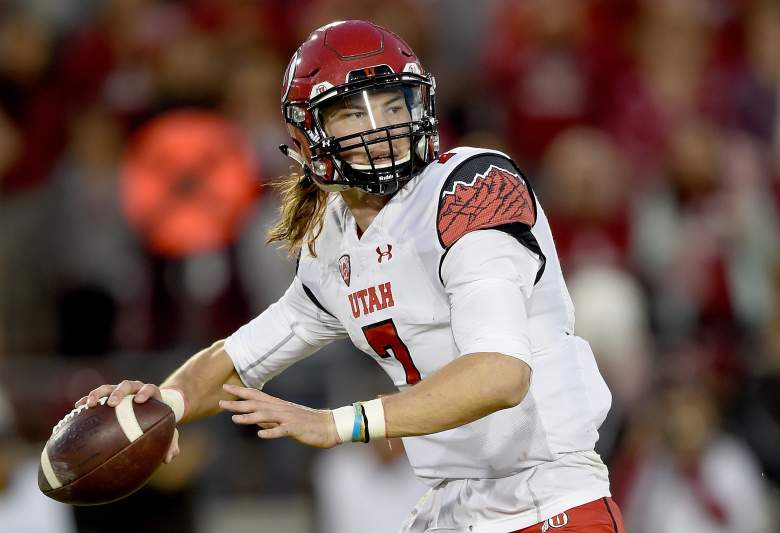 Wilson made program history this year, becoming the first quarterback to start all four seasons at Utah. (Getty)

Travis Wilson has put in his time with the Utah football program. Four years, in fact.

Wilson, who grew up in California, has had to compete for his job as the Utes starting quarterback nearly every offseason and, every offseason, he’s won. This year, he made team history, becoming the first quarterback in Utah history to start all four years on the team.

And, so far, this year Wilson has been at his absolute peak. He’s throwing a career-best 68 percent completion this season and has led Utah on several scoring drives with his legs as well as his arm.

Despite an early-season shoulder injury, Wilson led Utah to victory over Oregon in week four, racking up 327 yards of offense on his own. He completed passes to nine different receivers and helped the offense notch five straight scoring drives. 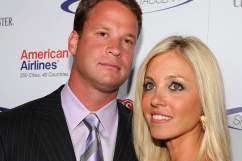 2. He Was Named the Las Vegas Bowl MVP as a Junior

Wilson capped off a dominant 2014 season, playing in all 13 games, by being named the MVP of the Las Vegas Bowl, leading the Utes to a victory over Colorado State. Wilson rushed for a season-best 91 yards and three touchdowns and passed for another in the 45-10 rout as the Utes won their 11th bowl game in 12 appearances.

By the end of 2014, Wilson was 190-for-313 passing for 2,170 yards (169.9 per game) and 18 touchdowns with just five interceptions. He moved into Utah’s single-season top-10 in two different categories; touchdowns and completions. Wilson was also the last starting quarterback in the entire country to throw an interception, going without a pick in the first eight games of the season.

Wilson posed with his mother, JoMarie, after being named MVP of the Las Vegas Bowl last year. (Instagram)

Wilson didn’t just happen upon his athletic talent. He inherited it. His parents, Tim and JoMarie, both competed at the college level at San Diego State where they played football and softball, respectively.

Their college sports years in the collective rearview mirror, both Tim and JoMarie are now focused on slightly different careers. Tim now works as a vice president of a construction company and JoMarie as a junior high school teach in San Clemente, California.

Wilson credits both of his parents with influencing his outlook on life, both on and off the field. He has said they “raised me right” and if he had a day off to go anywhere in the world he’d like to just go home so that he could spend time with his family, including his older brother and younger sister, and “just sit around with them and hang out for a while.”

4. He Graduated With a Degree in Sociology Last Year

After graduating early from high school, Wilson added to his impressive resume, graduating with his bachelor’s a year early this May. (Instagram)

Although he began his academic career at Utah as a sports management major, Wilson shifted his classroom focus and graduated with an undergraduate degree in sociology this May. He told Desert News:

Wilson was one of 23 members of the Utah football team to participate in the commencement ceremonies.

This isn’t the first time that Wilson has expedited his studies. He graduated early from San Clemente High School and enrolled early at Utah in 2012. In his undergraduate career, Wilson was also a two-time honorable mention Academic All-Pac-12 Conference.

5. Wilson Has Weathered Criticism & Injuries Throughout His Career at Utah 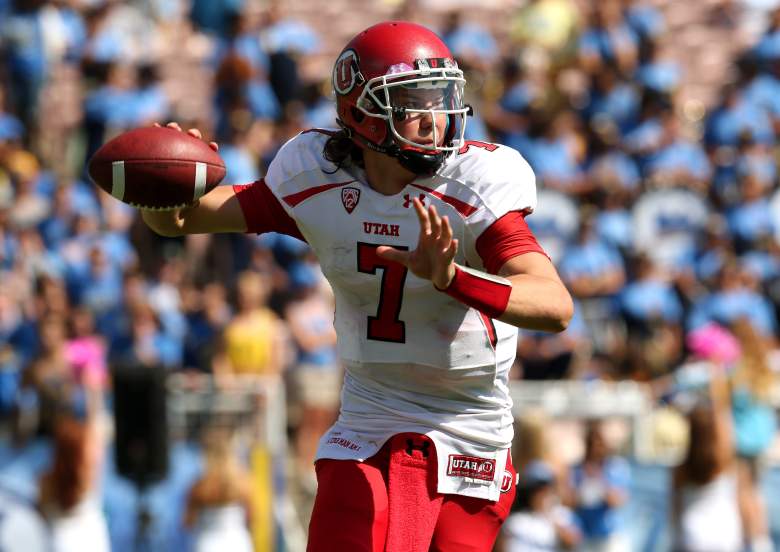 Wilson battled back from a near career-ending injury during his sophomore season in 2013. (Getty)

It hasn’t been an easy college road for Wilson.

The California native has suffered some heavy criticism for his on-field performance throughout his career as Utah football fans have questioned his ability to find success in the highly-competitive Pac-12.

Some people talk that we’re not very good at quarterback. I think all of us feel like we’ve got something to prove — me as their coach and them as players.

In addition to criticism from the outside, Wilson has battled through in-sport obstacles as well. During his sophomore season Wilson suffered a season-ending brain injury that was discovered after he sustained a concussion against Arizona State. The condition was originally thought to be career-ending, but Wilson battled back and returned to the field for his junior season in 2014.

After all of it, Wilson is still just as determined as ever to lead Utah to national recognition. He’s confident, he’s determined and he’s ready to, once again, block out the critics. “There were times that were up and down, but I’m glad I got to finish the season and finish on a good note,” he said. “Now I’ve just got to make sure that carries onto this season as well.”