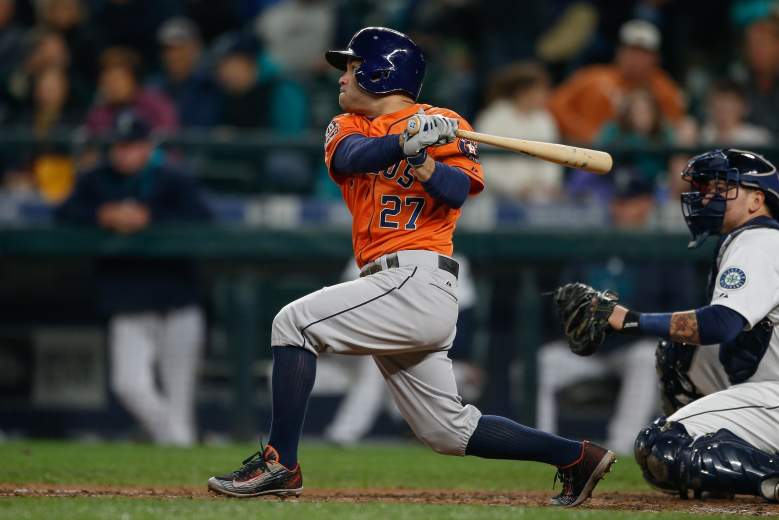 Jose Altuve became the first player in Astros history to notch back-to-back 200-hit seasons and now he hopes to lead Houston in the postseason. (Getty)

Things got a little bit crazy towards the end (we almost had three-way ties!) but the Houston Astros clinched the final AL Wild Card spot on Sunday afternoon, setting up a Tuesday night tilt against the New York Yankees.

The Astros should also probably send a fairly large thank you gift to the Texas Rangers for defeating the Los Angeles Angels 9-2. The win gave Texas the division but also secured Houston a postseason berth.

This is a team that lost 100 games in three straight seasons (2011-13) and despite a bit of a late-season skid, the Astros head into Tuesday’s matchup brimming with youthful confidence.

The Yankees are also on a bit of a slide, falling to the Baltimore Orioles 9-4 in their final game of the season. Injuries have taken their toll on New York and the pinstripes will likely be without second baseman Stephen Drew throughout the postseason after he was diagnosed with a vestibular concussion earlier this week.

Masahiro Tanaka is slated to get the start on the mound for the Yankees in the Wild Card tilt. The Astros will go with all-star Dallas Keuchel. First pitch is set for 8:08 p.m. ET at Yankee stadium and will be broadcast on ESPN. The winner of the game goes on to play the Kansas City Royals in the ALDS.