It’s that time of year. (Getty)

Last year there were only two undefeated teams from the Power 5 conferences at the time of the first College Football Playoff Rankings. When the first iteration this year’s rankings are released tonight, there are eight undefeated teams making their claim for the four-team playoff bracket.

Clemson and LSU are the only two teams many believe to be a lock for tonight’s bracket debut. The teams have some of the toughest schedules in the nation, and have kept their records unblemished. But the season is far from over, and the Top 25 will be loaded with teams that have late-season opportunities to climb the CFP rankings.

This is the official Top 25 revealed on the selection show Tuesday night:

All signs point to ACC leader Clemson hearing their name called tonight. According to ESPN, no team in the nation has played a tougher schedule. Their only close games this year have been at Louisville and home against Notre Dame, which stands as one of the best wins in college football thus far this season.

Clemson has been getting it done on both sides of the ball. They have a Heisman candidate in QB Deshaun Watson, and currently rank fifth in the nation in total defense.

If LSU stays unbeaten, they are a lock for the CFP. They have one of the nation’s toughest schedules, one that gets tougher on Saturday when the Tigers face Alabama. They have the best running back in the country, and with a healthy Leonard Fournette it’s tough to imagine LSU losing anytime soon.

The problem is that they’ll have no time to get healthy, as they play the toughest November in college football. After Alabama, the Tigers still have meetings with Ole Miss, Arkansas, and Texas A&M to close out the regular season.

It would be hard to picture the Final Four bracket without the defending national champions. The Buckeyes haven’t been dominant this season, but are undefeated and worthy of top four status. After some shaky performances early, OSU has rebounded with two consecutive blowout wins.

With the Buckeyes abundance of capable QB’s, don’t expect OSU to be punished too much in the rankings for losing J.T. Barrett. While the committee does consider injuries when making their decision (Re: Baylor), the Buckeyes wealth of talent leads me to believe they won’t get any sympathy from the selection committee.

Despite all the undefeated teams, Alabama is ranked fourth in the ranking. The committee isn’t swayed by current records, and Bama’s brutal SEC schedule puts them into the playoff. Alabama has a close loss to a good Ole Miss team, and otherwise has handled a schedule ranked third-toughest in the country. 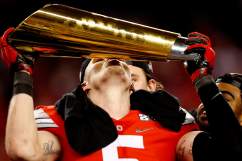