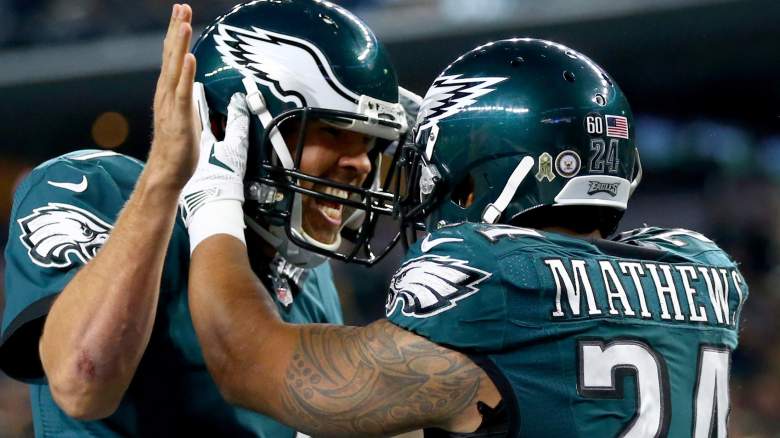 The Philadelphia Eagles staged a walk-off victory on the first drive of overtime to defeat the Dallas Cowboys on Sunday night. (Getty)

Jordan Matthews out-ran the Dallas Cowboys defense to lift the Philadelphia Eagles to an OT victory on Sunday night in a battle of NFC East rivals.

Matthews had been a receiving force all night, finishing the game with nine catches for 133 yards, but this one was particularly impressive. Check it out:

Of course, Matthews had to catch those passes from someone and Sam Bradford had a pretty successful night under center, completing 25 of 36 passes for 295 yards and the game-winning TD.

It’s a painful loss for Dallas, which, finally, started to look like the Cowboys team pre-injuries. Matt Cassel threw for 299 yards and three touchdowns – including one absolutely ridiculous catch by Dez Bryant in the end zone. But the Dallas defense couldn’t hold on when it mattered and the Eagles were able to score on their first possession of OT.

Click here for a full box score of the game and read on for some of the divisional matchups best highlights:

Dez Bryant Made an Absurd Catch in the End Zone

And he’s still getting those ups. That’s not normal. Watch this ten times:

For good measure, that touchdown pass was the 100th of Matt Cassel’s career. Impressive accolades for everyone!

Jordan Hicks Jumped a Dallas Route & Was Off to the Races

Jordan Hicks was not the wide receiver on this play.

#Eagles Jordan Hicks really needs to be in rookie of year conversation. That was a heckuva read and a heckuva catch to go 67 yards for TD.

The Eagles defender absolutely jumped the route in front of Darren McFadden and sprinted down the sideline for the pick-six. Jordan Hicks is incredibly fast.

Cole Beasley is having himself a game.

The Cowboys wide receiver hauled in his second touchdown reception of the night late in the third quarter, providing the perfect answer after Philadelphia had rushed out to a seven-point lead.

Check out this play:

Beasley’s playing pretty alright there in the middle of the field.

The Philadelphia Eagles offense notched one of its most impressive drives of the entire season midway through the third quarter as Ryan Mathews dashed six yards into the end zone to give his squad the lead.

The down-the-field drive was particularly impressive when you consider this:

Eagles go 95 yards on 7 plays for TD and knock 2 Dallas LBs (Sean Lee and Anthony Hitchens) out in the process.

Also DeMarco Murray CAUGHT a pass for 44 yards, the longest of his career. That’s pretty good too.

Welcome back to Dallas, DeMarco.

The Eagles running back barreled his way into the end zone to give Philadelphia its first points of the night and knot the game at seven-all midway through the second quarter. Check it out:

Philadelphia’s offense looked dominant on the drive, visibly exhausting the Cowboys defensive line on its way down the field.

Yeah, it’s been a while. In fact, that’s the first pass Cole Beasley has caught since Matt Cassel took over as the starting quarterback in Dallas. For real.

First catch by Beasley since Cassel took over

If you’re a Cowboys fan, you probably don’t care. You’re probably only concerned that your team is in the lead and your offense, finally, looks productive. Dallas marched 97 yards down the field on that drive, including a down-the-field strike to Dez Bryant, before Cassel found Beasley. The QB – who didn’t even pass for 100 yards last game – racked up over 70 yards in the air on that one possession.

The Philadelphia Eagles and Dallas Cowboys are playing for the second time this season and the implications of this matchup are much bigger than just you’re usual mid-season NFC East tilt.

This one could make or break a season.

Sure, the Cowboys are on a five-game losing skid and Tony Romo won’t be back for another two weeks, but a victory here could make up for that in a division that is still so wide open that there are gale force winds blowing through it.

Philadelphia, on the other hand, is coming off a bye and looking for their third straight victory in Dallas under Chip Kelly. The key for that victory, unlike previous weeks, is to get the defense going. The Eagles have already forced a league-best 19 turnovers this season and against a Dallas offense that has been sputtering, a strong defensive performance could be more than enough to secure a win.

Keep an eye out on the Eagles linebacker corps, including Kiko Alonso and Jordan Hicks. You’ll likely see the two dropping back in coverage a fair amount this weekend, looking to shut down the few receiving options Dallas has.