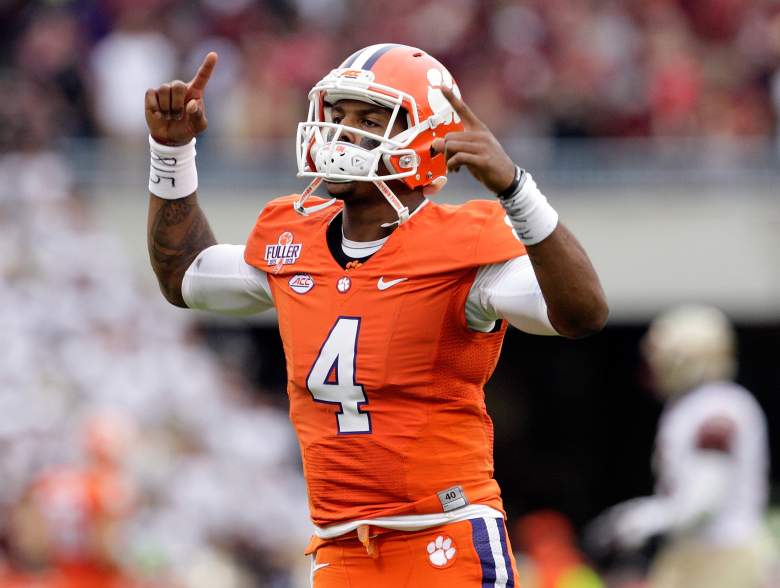 Deshaun Watson and Clemson had a lot to celebrate. (Getty)

Clemson had lost three straight games to Florida State, but finally got a victory over the perennial kings of the ACC. The Tigers 23-13 victory signaled a new team atop the ACC and continued to cement their chances of advancing to the College Football Playoff.

FSU scored on the very first offensive play of the game, and it appeared it was going to be a long game for Clemson. The Seminoles led 10-6 at halftime. The Tigers came up with a big fourth quarter on both offense and defense. They stopped the Seminoles on 4th-and-one late in the game and went on to score the game clinching touchdown.

Deshaun Watson was impressive both running and passing the ball. He finished with 297 passing yards and a touchdown. Watson also added 107 rushing yards and one touchdown.

The Seminoles started Sean Maguire at quarterback over a healthy Everett Golson. Maguire was unable to jumpstart the offense. He finished with 165 passing yards and one interception.

Here is how Clemson got the victory:

Dalvin Cook Scored on the First Offensive Play of the Game

Though Everett Golson was healthy, Sean Maguire got the start for Florida State at quarterback. He connected with playmaker Dalvin Cook on the first offensive play of the game for a 75-yard touchdown.

Tigers fans use their phones to light up Memorial Stadium after a touchdown by Deon Cain! #TheRachReport .@theACCDN pic.twitter.com/O6ulTkm0h6

Deon Cain scored a 38-yard touchdown midway through the third quarter. DeShaun Watson found Cain and connected on a screen pass. Cain did the rest of the work by scampering into the endzone.

FSU Was Stuffed on 4th and One

Huge 4th-down stop by the @ClemsonFB defense. #Clemson up by 3 with 6:17 left. #FSUvsCLEM

Late in the fourth quarter, the Seminoles went for it on 4th and one. The Clemson defense got a big stop and the Tigers offense took over with about six minutes left in the game.

Wayne Gallman Sealed the Game for the Tigers

Running back Wayne Gallman rushed for a 25-yard touchdown late in the fourth quarter. The touchdown gave Clemson a 23-13 lead and sealed a victory against the Seminoles.