Jarrett Stidham was near-perfect from the pocket in his first collegiate start. (Getty)

Jarrett Stidham did not disappoint in his starting QB debut.

Filling in for the injured Seth Russell, Stidham didn’t miss a beat in the Baylor offense; finishing Thursday’s game completing 23 of 33 passes for 419 yards and three touchdowns. His QBR, ESPN’s stat to determine quarterback play, was a 94.0 out of 100. Stidham also added a rushing touchdown. Baylor defeated Kansas State, 31-24, to remain undefeated.

Stidham stepped up as the starter after Seth Russell suffered a damaged cervical vertebra in his neck two weeks ago at Iowa State. Russell has since had surgery, and the injury is not expected to end his football career.

Because Baylor has been regularly blowing out their opponents, Stidham has already appeared in six games this season. He’s only attempted 28 passes, but he has an 85.7 percent completion rate and six touchdowns.

The 19 year-old from Stephensville Texas was a three sport athlete in high school, and dabbled at receiver when he wasn’t shredding defenses as a dual-threat quarterback. He finished his high school career with over 3,000 total yards and 50 touchdowns.

The hype on Stidham has been growing since before his senior year, when he had a strong showing at the Elite 11 quarterback competition. At that time Stidham had committed to Texas Tech, but he withdrew in December. Nine days later, he chose Baylor over offers from Oregon, Oklahoma and Alabama.

Here are the highlights of Stidham’s big night:


His First Drive Went For a Touchdown & Lasted Under Two Minutes

Stidham connected with Corey Coleman for 36 yards on the first play from scrimmage, and the Bears never slowed down. Stidham completed three passes on the seven-play drive, and finished the job with a one-yard touchdown run.

After Kansas State responded with a touchdown drive that lasted over nine minutes, Stidham wasted no time getting back to work. After three straight Shock Linwood rushes, Stidham unleashed a bomb to streaking KF Cannon for a 55-yard score.

Talk about easy. Watch how the safety in the bottom-left of the video is frozen by the play-action.

Stidham Dropped a Dime For an 81-Yard Touchdown

After an interception gave Baylor the ball at their own 19 yard line, Stidham uncorked a bomb along the left sideline. He dropped a 45-yard pass into the hands of Corey Coleman, who ran into the endzone untouched. All three Baylor touchdown drives lasted under two minutes.

Kansas State put up a valiant effort in the second half, and refused to have their doors blown off by the Baylor offense. The Bears got just one more score, on a possession that started exactly halfway through the third quarter. It ended just over two minutes later, when Stidham hit Corey Coleman on a three-yard score.

All the hype has been on Stidham tonight, but look at Coleman make that grab. That was Coleman’s 20th touchdown for the season, which is a lot for a wide receiver. Or any player this early in the season. This offense is ridiculous.

Corey Coleman has more touchdowns this year than 17 FBS schools. 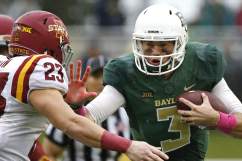