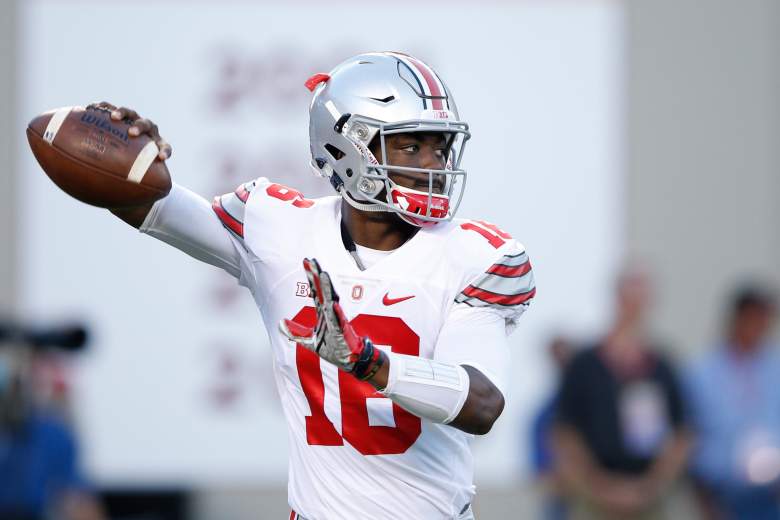 Video of JT Barrett’s arrest on October 31 has surfaced on social media after TMZ published the dash cam recording. (Getty)

Ohio State quarterback J.T. Barrett tried to pull the name card when he was stopped by police on October 31 after he pulled out of a line for an upcoming DUI checkpoint.

Barrett’s attempt to move his car drew the attention of police officers who quickly pulled him over. TMZ has obtained dash came footage of the Halloween incident and you can watch the entire scene play out here.

The QB was given several field sobriety tests, but the officers were not convinced he’s 100% sober and arrest him. That’s when Barrett responds with “I’m the quarterback of Ohio State … officer, there’s nothing you can do?”

Barrett was suspended for one games following the incident and, earlier this week, pled guilty to operating a vehicle under the influence. His license will be suspended for 180 days.

Despite the off-the-field issues, Barrett is expected to start for the Buckeyes against Illinois this Saturday. Ohio State head coach Urban Meyer explained the decision, saying:

If J.T. has a good week of practice, he’ll get the start. It’s never an easy call because one guy just had his 11th [consecutive] win, 250 all-purpose yards, made some good plays for us and is invested in our program. It’s never easy. I think it’s the right thing at this time.

Barrett’s financial aid will also be forfeited for the 2016 summer term, but he will return to his starting spot after already racking up 14 touchdowns this season. He took over the starting role from Cardale Jones.