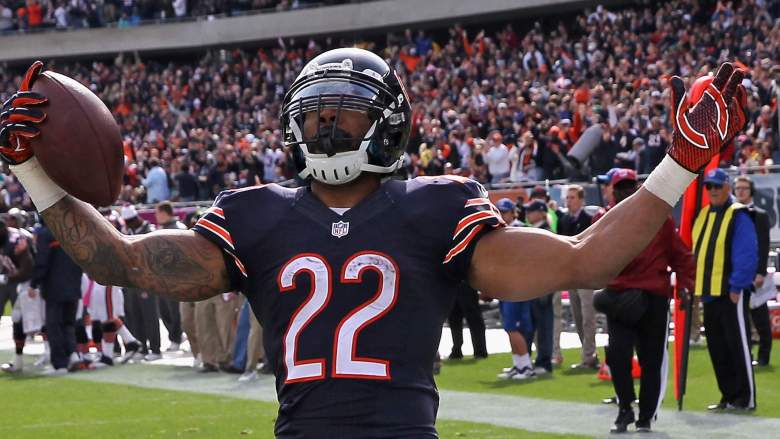 Matt Forte is expected to return to the Chicago Bears roster this Thursday – against the Green Bay Packers. (Getty)

All is not lost Matt Forte fantasy owners.

According to ESPN, the Chicago Bears running back is on track to get back on the field for Thursday night’s matchup against the Green Bay Packers. Nothing like a Thanksgiving night matchup against a divisional rival in primetime to get back into the fantasy swing of things, huh?

Forte has sat out the last three games with a knee injury, but went through extensive warmups last week ahead of the Bears final-second loss to the Denver Broncos. At the time of his injury, Forte had 767 yards in seven games.

Since then, Forte’s starting role has been turned over to rookie Jeremy Langford, who has been more than successful in the backfield. Langford has racked up three rushing touchdowns as well as 13 catches for 196 yards and another score.

But while Forte fantasy owners may be metaphorically chomping at the bit to get the veteran running back back in their lineups, it might be more prudent to hit the pause button on that.

Even Forte said he was willing to split carries with the more-than-productive Langford:

The NFL is ‘What have you done for me lately?’ … I’ve obviously been out for a few games, and he’s done his job, done well stepping in for me. So everybody is always looking for the next best thing. I’m in my contract year, (so) it’s obvious that that’s the storyline that will come up. I actually like it because now going forward I’m not going to have to play every single play or every down. So we can at least be healthy and be at full speed out there.

Forte played a career-high 92 percent of the snaps last season and was at 83.6 percent of snaps before his injury. By comparison, Langford had just 40 snaps in the first six games.

This is a huge game for the Bears as well and the odds are pretty good that head coach John Fox is going to want to stir up the offensive-pot too much with a playoff berth still on the line.

So, in the grand scheme of things, Forte fantasy owners, it’s probably best to go in with limited expectations. He’ll get carries – and yards – but might not get touchdowns. The Packers run defense has also improved significantly over the past few weeks, giving up just 2.69 yards per carry over the past three weeks.

Jay Cutler’s Wife & Kids: The Pictures You Need to See

Read More
Chicago Bears, Football, NFL
The Chicago Bears running back is on track to play in primetime on Thanksgiving night, but what are the chances he ends up in your fantasy lineup?