Daniel Jacobs (L) looks to retain his WBA world title when he takes on Peter Quillin on Saturday. (Getty)

Daniel Jacobs puts his WBA world title on the line against Peter Quillin’s perfect record when the two Brooklynites face off in 12 rounds of middleweight action this Saturday at Barclays Center in Brooklyn, New York.

Read on for your odds, a preview, and a prediction. 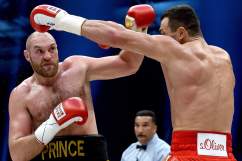 Peter Quillin during his fight versus Michael Zerafa. (Getty)

Peter Quillin (32-0-1, 23 KOs) enters the fight a slight favorite to win in Vegas and on online sportsbooks (see below). But this bout is a real pick’em, with both fighters bringing his one-punch knockout power to the encounter and each presenting the toughest challenge yet for the other.

“There is no doubt this is going to be one of the biggest fights Brooklyn has ever seen,” said Jacobs (30-1, 27 KOs) at the announcement of the bout. “Peter and I go back a long time, but this is business. I’m the champion and he’s the challenger. I’m going to do everything I can to win on December 5 and show the world that I’m the best Brooklyn has to offer.”

Daniel Jacobs, a 28-year-old cancer survivor, was last in action with a second-round knockout victory over Sergio Mora in August. Prior to the Mora encounter Jacobs had stopped Caleb Truax in April, and in August of last year, he kayo’d Jarrod Fletcher.

Jacobs is known for his power, but he’s a lot more than just a slugger. A ring savvy technician with a deep amatuer background (record of 137-7 before going pro), Jacob has quick hands and feet, an educated jab, and a comprehensive defensive game.

“I think my skills are an advantage,” said Jacobs at a recent media workout. “Skills pay the bills. At the end of the day I have a lot of skills over ‘Kid Chocolate.’ Speed is one. He’s probably a bigger puncher and naturally heavier. With all that power, he has to get to me. He has to be able to land those shots.”

Get to know the champ through this short Showtime special:

Peter Quillin, a 32-year-old former world champion from Chicago now fighting out of Brooklyn, made his last ring appearance in September with a victory via KO over Australian prospect Michael Zerafa. Going into that fight, Quillin had fought to a draw versus Andy Lee in November of last year.

A good all-around fighter, Quillin has good pop to his punches, excellent legs, and a solid chin.

“I’m mentally and spiritually strong,” said Quillin. “I’ve been in 33 of these fights in my career. Every one of those guys has said they’re going to beat ‘Kid Chocolate’ but no one has beaten me. I’ve been in with a lot of different guys and I’m yet to be beat.”

Neither Jacobs nor Quillin have very strong ring identities, they are a both really good all-around American-style boxers. What is interesting to me in this fight is the power matchup– both are hard-hitting boxer/punchers that could turn the contest around with one shot.

I expect a respectful start to the contest, with both combatants opening up once they get a taste of each other’s power. But I see Quillin using his ring movement to control the distance, to pile up the points behind an active jab, and lift the WBA belt with a decision win. 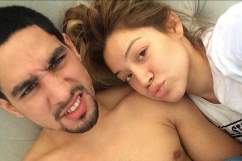