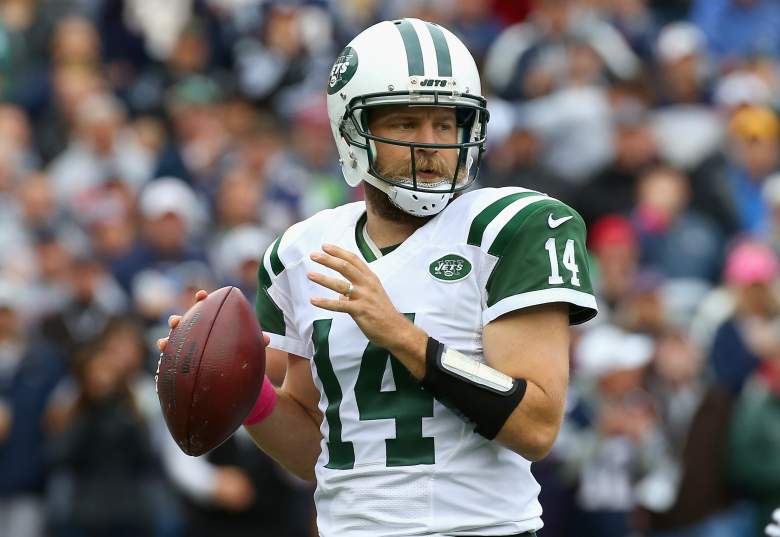 Get Ryan Fitzpatrick back in your lines. The New York Jets quarterback is starting on Sunday. (Getty)

Ryan Fitzpatrick isn’t going to let a little thing like a torn ligament stop him from starting for the New York Jets on Sunday afternoon.

Gang Green’s quarterback will be ready under center as the Jets take on the Jacksonville Jaguars, looking to snap a two-game losing streak, despite suffering at least one torn ligament in his left thumb last week.

Geno Smith took over for Fitzpatrick in the blowout loss to Oakland, but he’s also facing injuries issues of his own and his bruised shoulder made him questionable this weekend as well. Still, both quarterbacks participated in practice on Wednesday.

So, that means Fitzpatrick is getting the start.

But, what does it mean to your fantasy lineup? Well, let’s examine some of the big-time factors that could affect Fitzpatrick’s performance on Sunday.

He’s right-handed. That’s a big part. Fitzpatrick won’t be throwing with the injured hand and wore a protective glove on it during Wednesday’s practice. The biggest challenge will be taking the snap from under center and using his left hand to hand off the ball to his right side. Of course, when you’re starting a quarterback in fantasy, you’re not too interested with their handoff ability. As long as he doesn’t fumble.

But what about Fitzpatrick’s passing chances?

The Jaguars are No. 8 in the entire league in defending the pass, allowing 263.9 every time they take the field. Perhaps more importantly, Jacksonville has recorded just three interceptions this season in seven games. That’s not good.

The team has also given up 12 passing touchdowns and are giving up, on average, 7.6 yards a pass.

On the flip side, Fitzpatrick is on the lower side of the NFL passing attack, with 1,518 passing yards and 11 touchdowns this season.

It also helps that Fitzpatrick has some of the NFL’s best receiving threats on his side. Sure, Brandon Marshall has been battling through a lingering ankle and toe injury, but Brandon Marshall also caught two touchdown passes with the Bears on basically just one foot last week. Eric Decker is expected to play as well this week, despite his season-long injury issues.

In other words, you should start Fitzpatrick this week if you have Fitzpatrick on your roster. The potential success outweighs the potential problems and this Jacksonville secondary isn’t going to scare anyone.