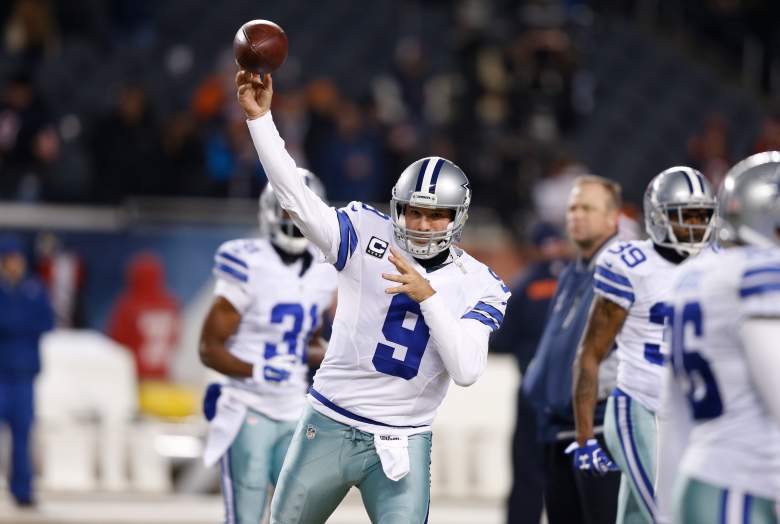 Tony Romo appears to have re-injured his collarbone after taking a hit in Thursday night’s game against the Panthers. (Getty)

Dallas Cowboys quarterback Tony Romo left Thursday night’s game against the Carolina Panthers at the end of the third quarter after taking a big-time hit. But, here’s the million dollar (and playoff berth) question – did he break his collarbone again?

Not that anyone missed it, but here's the Romo injury again. (Vine via @SportsDailyBlog) https://t.co/bZGM3BkHTB

Mike Florio of Pro Football Talk reported that Romo “most likely” has a small fracture of the clavicle. He underwent x-rays at AT&T Stadium on Thursday night, but will reportedly get a CT scan on Monday to make sure.

Hardly a surprise, but here it is: A source close to Tony Romo told @Edwerderespn that the QB is "done for the season."

It was the same collarbone that kept Romo sidelined for nearly two months this season and Jon Machota of The Dallas Morning News noted Romo “just tossed his helmet” on the way to the locker room.

Cowboys head coach Jason Garrett said x-rays were inconclusive, but did add that the injury felt similar to the one Romo had sustained earlier this season.

Romo, 35, threw for 106 yards and was picked off three times in the Cowboys lopsided loss to Carolina on Thanksgiving night. Matt Cassel entered for the Pro Bowl quarterback after he went into the locker room and, reportedly, will remain the Dallas starter for the remainder of the season.

Jerry Jones confirmed that Romo suffered a hairline fracture in his left clavicle on Friday afternoon. The injury will not, however, require surgery.

Read More
Dallas Cowboys, Football, NFL, Tony Romo
The Dallas Cowboys quarterback went down with another injury on Thursday night after taking a major hit against the Carolina Panthers.