Nathan was the 2014 Best in Show winner. (Twitter/MTVNews)

Thanksgiving isn’t all about parades, food and football.

It’s about dogs, too. The Purina National Dog Show has become a staple of Turkey Day, and the pups will be back in 2015 attempting to follow in the paw-steps of Nathan, the Bloodhound who took home Best in Show last year. This year’s show actually took place a week ago at the Kennel Club of Philadelphia, but as has become tradition, it will broadcast on a tape delay on Thanksgiving afternoon.

NBC will have coverage starting at Noon across all time zones. If you can’t get to a TV, here’s how to watch online and on mobile:

Is your heart with the #Hounds? Watch the National Dog Show on @nbc on #Thanksgiving Day! pic.twitter.com/MXARHucTGH

If you have access to a cable or satellite subscription — either yours or someone else’s — you can watch the show online for free via NBC Sports Live Extra. The stream begins at Noon ET (compared to the TV broadcast, which is on at Noon across all time zones), and you’ll need a cable or satellite log-in and password to watch online. The site’s frequently asked questions page has a rundown of technical requirements and other information.

Note: If you can’t watch the live stream, follow along with the results here: 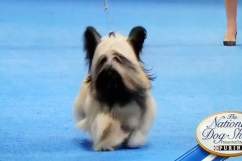 Are you and your squad ready? Thursday at Noon. Be ready. #squadgoals #nationaldogshow pic.twitter.com/sTVeMsHi86

Mobile users can watch the show via the NBC Sports Live Extra App, which you can download in the App Store or the Google Play Store. As is the case with the desktop livestream, you’ll need a cable provider log-in to watch.

Read More
Dogs
The best canines from around the country gather for the 2015 Purina National Dog Show. Find out how to watch online and on mobile.