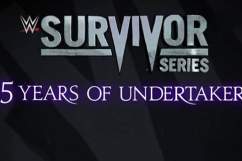 Here’s our extensive preview piece on each and every announced matchup that will take place on the November 2015 PPV/special event, WWE Survivor Series 2015!

Predictions & Winner: Raise your hand if you felt uncomfortable about Paige mentioning Charlotte’s deceased brother during their final RAW segment? Looks like most of you fans considered that a truly heartless move on Paige’s part. So now this beef over the Divas Championship has reached a fever pitch. Paige’s constant verbal shots may push Charlotte to go a lot harder than she did against Nikki Bella. We envision this title match being a lot more physical than past Divas encounters this year. Paige will pull out all the stops during this championship encounter, but Charlotte will ultimately prevail. This feud is much too intense to end at this PPV, so expect to see some kind of rematch at TLC 2015.

The Brothers of Destruction (The Undertaker and Kane) vs. Two Members of The Wyatt Family

Predictions & Winners: The Undertaker and Kane have reunited once again. And this time, they’re dealing with the combined wrath of the creepy Wyatt Family. So who do we think’s gonna step up to do battle with The Brothers of Destruction? Our money’s on Luke Harper and Braun Strowman. These two big behemoths stand a much better chance at getting the upset victory over Taker and his brother from Hell. As this tag team encounter goes down, we have a feeling Bray and Erick will interfere at certain points and try to gain the advantage for their family members. Once the smoke finally clears though, the dreaded Brothers of Destruction will be the ones with their fists raised. Taker’s celebrating his 25th anniversary this year, so you know he’ll be on the winning end of this match.

Predictions & Winner: Owens has put on some great performances during this WWE World Heavyweight Championship tournament. And so has Dean Ambrose. It’s pretty evident that both men will continue their long streak of putting on entertaining matches when they face each other. Our money’s on this match standing out as a bona fide show stealer. Owens will push Ambrose to the limit, while Ambrose will reach into this maniacal personality to survive. In the end though, Ambrose will prevail and go on to face the winner of Roman Reigns vs. Alberto Del Rio.

Pages: 1 2 3
Read More
Pro Wrestling, The Undertaker, Wrestling, WWE
The finals for the WWE World Heavyweight Championship will go down at Survivor Series 2015. Here's our thoughts on who will prevail as the new #1 champion in the company.