Aaron Rodgers found Richard Rodgers for the game winning touchdown pass on the Thursday Night Football matchup between the Lions and Packers. The game appeared to be over when Rodgers was sacked with no time remaining.

A flag was thrown and a facemask penalty was called on the Lions. The penalty allowed for one more un-timed down and it was just the play the Packers needed.

Rodgers threw the ball 70 yards in the air as Richard Rodgers boxed out defenders for the amazing touchdown reception. He went up for the catch and secured it for the game-winning touchdown.

The Packers trailed for most of the game. Aaron Rodgers had scored a rushing touchdown earlier in the fourth quarter to bring the Packers within one possession of a win.

Here is how the Packers reacted after the play: 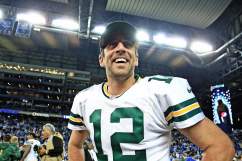