Eagles fans have finally got what they wanted. After three years of high expectations and mediocre results, Chip Kelly has been shown the door in Philadelphia.

Kelly originally came to the NFL from Oregon, where he built the school into a football powerhouse. Kelly tried to bring his fast-paced offense to the NFL, and initially had success. But after Kelly was given control over the roster, several key decisions changed opinion of him. That included the dismissal of Desean Jackson and Lesean McCoy, two of the Eagles best players at the time. The Eagles are currently 6-9, and have been eliminated from postseason contention.

“We appreciate all the contributions that Chip Kelly made and wish him every success going forward,” said Lurie.

The Eagles also released Ed Marynowitz, who served as vice president of player personnel. Pat Shurmur will serve as the Eagles interim head coach for their final game.

The Eagles finish the regular season against the Giants on Sunday.

Here are the facts on Kelly’s departure:

After four years as the head coach of Oregon University, rumors began to build around Chip Kelly’s move to the NFL. It finally happened in 2013, when Kelly replaced Andy Reid to become the 21st head coach in Eagles history. Kelly also interviewed with the Bills and Browns.

As with most relationships, the beginning of Kelly’s time in Philadelphia was great. Lurie said Kelly “..Will be an outstanding head coach for the Eagles,” adding that he thought Kelly was a “real smart, forward-thinking coach.”

Kelly dazzled in his debut, as the Eagles opened the 2013 with 33 unanswered points in a win over Washington.

For all the criticism surrounding Kelly, many teams have fared worse than the Eagles. In the past three seasons the Eagles have gone 26-21, having finished 10-6 the previous two seasons. Kelly lost his only playoff appearance 26-24 to the Saints in 2013.

Things started to turn earlier this year, when Howie Roseman’s job title was changed to executive vice president of football operations. After that Kelly was the Eagles coach and general manager, and this is where many believe he started to struggle.

Racist allegations aside, Kelly was responsible for losing several key offensive players to trades and free agency. Kelly traded Lesean McCoy, who is native to the area, to Buffalo in exchange for a linebacker that was recovering from knee surgery. He saw both Desean Jackson and Jeremy Maclin leave for other teams, decimating an offense that has never fully recovered.

Check out how the Eagles offensive numbers have dropped since Kelly took over as GM. It’s a full touchdown.

3. Kelly Rarely Discusses His Life Outside of Football

One criticism of Kelly is that he’s a quiet guy, and doesn’t fit your typical football persona. Up until a short while ago, it was unclear if he was even married. Kelly married Jennifer Jenkins in 1992, but the couple divorced in 1999. Known as sharp with a sarcastic sense of humor, Kelly in remarked in 2013 that “I’m not governed by the fear of what other people say.”

4. Kelly Had Only Four Years of Head Coaching Experience Before the NFL

When Oregon was dropping 60 points on teams every week, it seemed an inevitability that Kelly would eventually go pro. But there were red flags surrounding his ability to jump to the NFL, namely his career coaching experience.

Kelly burst onto the scene at Oregon after replacing former head coach Mike Bellotti, who was promoted to Athletic Director. Before that promotion, Kelly had been the offensive coordinator for the Ducks.

Kelly, who is 52, started his coaching career when he was 27 at Columbia University. He bounced around different roles until 1994, when he joined the staff at the University of New Hampshire. He spent 12 years at UNH, starting as running backs coach but spending eight seasons as offensive coordinator.

The Eagles only have one game remaining this season, but Pat Shurmur will run the sidelines for the Eagles next week. Shurmur has been a coach in the NFL since 1999, and has spent the previous three seasons as the team’s offensive coordinator.

Shurmur spent two years as a head coach, running the Cleveland Browns for two seasons in 2011 and 2012. Shurmur went 9-23 over those two seasons. 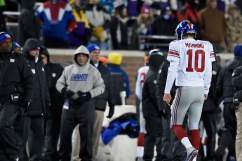