Could Dwight Howard be on his way out of Houston? (Getty)

In a word, maybe. According to SheridanHoops.com, Dwight Howard is unhappy with his role in Houston playing second fiddle to James Harden. The Rockets, who are vastly underachieving considering they reached the Western Conference Finals last season, may be in the right spot now to move the veteran big man.

One likely destination Howard could end up is in Miami, in a trade centered around budding center Hassan Whiteside, according to SheridanHoops.com. The move could work out well for both sides in the deal. Whiteside is dominating on defense, while averaging 12 points, 10 rebounds and four blocks per game this season. Meanwhile, a Howard pickup by Miami could help the Heat contend this year in the Eastern Conference; Miami sits just 1.5 games behind the Eastern Conference-leading Cavaliers through 23 games. Currently, the Heat are the third-worst scoring team in the NBA at 95.8 points per game, and could use a boost.

Also of note: Howard can opt out of his deal this summer. Houston has a viable starting center, Clint Capela, who’s nine years younger than Howard. Both of those factors could result in a trade, according to NBCSports.com.

Stay tuned to see where D-12 will wind up if the Rockets don’t decide to keep him in Houston. 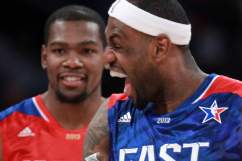 Read More
Basketball, Dwight Howard, NBA
Dwight Howard is reportedly unhappy with his role in Houston, playing second-fiddle to James Harden. Could he be on the move soon from the struggling Rockets?