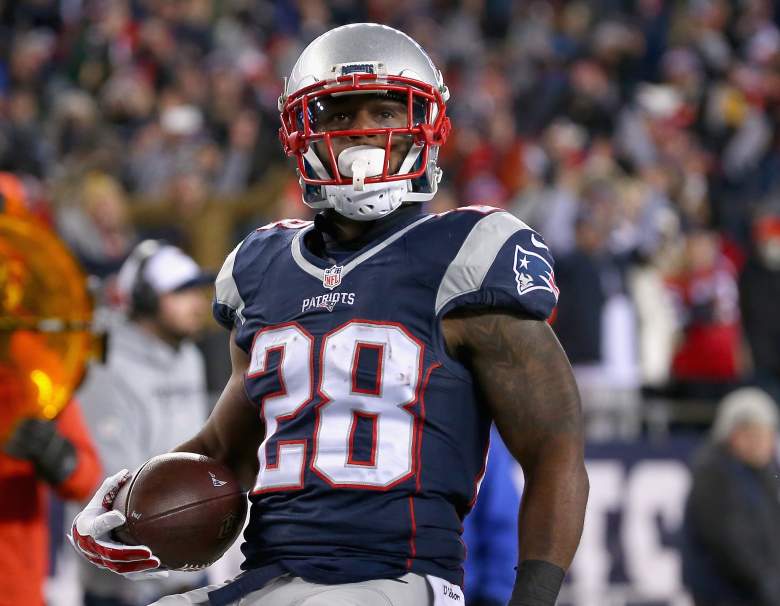 James White could take on a brand-new workload after injuries struck the Patriots backfield once again this week. (Getty)

Welcome to the spotlight James White.

The New England Patriots running back is likely to see his role in the backfield expand on Sunday afternoon after news broke that starter LeGarrette Blount’s season was over thanks to a hip injury.

Blount was spotted at the Patriots facility on Tuesday afternoon on crutches and ESPN’s Adam Schefter confirmed his season was over shortly thereafter:

So, who exactly is James White? He’s a 2014 Draft pick by the Patriots, selected in the fourth round out of Wisconsin and in two years he hasn’t exactly had a breakout moment. White’s career stats boast just 25 carries for 79 yards and two touchdowns. He hasn’t fumbled yet though, so there’s that.

But we’re not really here for White’s ability to run the ball – despite what his roster position may tell us.

White is a serious receiving threat and for a Patriots squad that is looking for serious receiving threats, he’s a prime Brady target. White caught 10 passes against the Philadelphia Eagles in Week 13 for 115 yards and a touchdown and he’s been doing a fairly good job of stepping into the shoes Dion Lewis and his torn ACL left behind.

White also caught four passes on Sunday night for 38 yards and one touchdown. That’s not particularly dominant, but it could be enough for players in a pinch.

Of course, White is probably best served in PPR leagues than any other fantasy format, but he’s a good option for those who have been depending on Blount in their fantasy playoff world.

So, what makes White a better option on the waiver wire than Brandon Bolden? The Tennessee Titans have given up the fifth-fewest fantasy points to running backs this season and while Bolden got the bulk of the carries on Sunday after Blount’s injury, White’s ability to also catch the ball makes him a better play down the stretch.

Now, go forth and win your fantasy leagues.