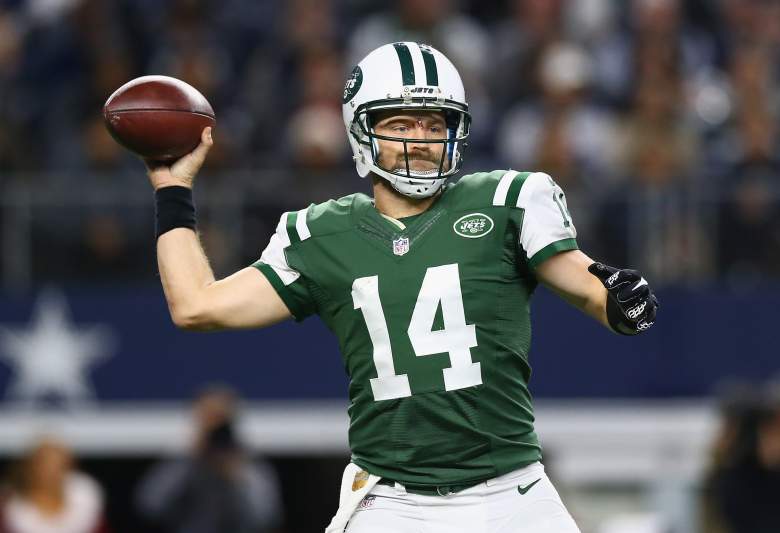 Ryan Fitzpatrick and the New York Jets are vying for playoff contention heading into Week 17. (Getty)

Seems simple enough, right? Except this is the NFL and this is the New York Jets battling for playoff contention.

Gang Green stunned much of the football-watching world on Sunday afternoon, staging a 26-20 OT victory over the New England Patriots at home and putting themselves in the drivers seat for playoff contention. If the season ended right now, the Jets would be facing Denver Broncos on the road. But the season doesn’t end today!

So, what does New York have to do heading into Week 17 to make sure the season doesn’t end next weekend? Easy. Beat Rex Ryan. Let’s break down the playoff scenarios for the Jets into the final week of the regular season and speculate a bit on who they could face off against in the postseason:

How the Jets Get In – the Easy Route

Simple. Win. New York would clinch a playoff berth with a win or a tie at the Buffalo Bills on Sunday afternoon.

“The last five weeks, they’ve all kind of been do-or-die games for us, so that’s how we’ve approached each one,” Jets quarterback Ryan Fitzpatrick said after the Week 16 victory. “We’ve got to get the next one to get in and that’s how we’ll view it. This is a fun run.”

The Bills are well aware of what is at stake in this game. After all, Rex Ryan defeated his former team at MetLife Stadium earlier this year and now the Bills are looking to spoil New York’s postseason run.

“We’re not going to the playoffs, so the Super Bowl is next week for us. I know we’re gonna have a lot of guys jacked. We already know what’s on the line.”

How the Jets Get In – the Harder Route

If the Jets can’t take down Buffalo on Sunday, it doesn’t necessarily mean their playoff hopes are totally dashed.

New York can still get a berth if the Pittsburgh Steelers lose or the Denver Broncos lose out. The Jets would win a tie with Denver because of a better conference record (8-4/7-5 to 7-5/6-6). However, the team would lose a tie to the Steelers because of a worse record in common games.

How the Jets Don’t Get In

If the Jets lose on Sunday afternoon and the Pittsburgh Steelers win and the Denver Broncos win, New York is officially eliminated from playoff contention. Here’s how the Week 17 schedule looks for the teams currently vying for one Wild Card spot:

Who the Jets Can Play

This is where things start to get a little bit complicated, so we’ll break it down by scenario.

If the Jets lose & Steelers lose in Week 17: New York would be the No. 6 seed and play the Broncos on the road.

If the Jets win & the Chiefs lose in Week 17: New York can jump up to the No. 5 seed and would play the AFC South winner, likely the Houston Texans, on the road.

If the Broncos lose out: New York can jump up up the No. 5 seed and play Kansas City on the road.

Read More
Football, New York Jets, NFL
Gang Green staged a dramatic OT victory over the New England Patriots on Sunday afternoon. So, what does that mean for their playoff chances?