Beckham and his mother have one of the best relationships in all of sports. (Instagram)

He of the seemingly weekly one-handed catches and almost superhero speed, Beckham has been the highlight of a New York Giants season that has been consistently inconsistent this fall. So, where exactly did Beckham stumble upon his talents?

Sure, the LSU grad has worked for his success. Any one who takes a moment to watch his pre-game warmup routine would understand that almost immediately. But Beckham has also lucked into a bit of genetic talent as well. After all, his father was a former football standout with the Tigers and his mother, Heather Van Norman, was one of the best track and field stars in all of LSU’s history.

Get to know Van Norman – and her own impressive speed – here:

1. Van Norman Was a Six-Time NCAA All-American in Track

Van Norman has been running for as long as she can remember.

One of the most successful track stars in all of Minnesota high school history, Van Normna’s father, Don, once commented, “The high school kids here like to hang their medals on their letter jackets. If Heather pinned her medals on her jacket, she would be bulletproof.”

The high school performance was enough to spark interest from some of the top track and field programs in the entire country before Van Norman opted to attend Minnesota before transferring to LSU.

She was forced to sit out for a year after transferring to New Orleans, but once she made her Tigers debut, there was no looking back for Van Norman. She went on to lead her squad to multiple NCAA titles and ran as the third leg of the 4X400 relay team. By the time she graduated from school in the early 90’s, Van Norman was a six-time All-American.

2. She Gave Birth to Beckham While She Was Still at School

Van Norman trained throughout her pregnancy while she was still a student-athlete at LSU. (Instagram)

In 1992, Van Norman was working to get the Olympic trials, but that goal was sidetracked a bit by something equally as important; giving birth to her first son. Still, despite being pregnant, Van Norman never stopped training.

She ran every day until Beckham was born and was fully supported by the LSU track team and coach Pat Hentry. He told NOLA.com:

If you’re a great athlete, you need support in any type of situation that takes you out of an athletic environment.

That first support for Heather came from her mother, and she needed that.

Heather was a great athlete, and a good young lady. We allowed nature to be what nature is, and when it was over she came back and ran. It was the right thing to do.

After Beckham was born both Van Norman and Beckham Sr. took on the role of full-time athletes, students and parents. They brought their son to class with them and then to practice. For all intents and purposes, Beckham grew up at LSU.

3. Van Norman Went on to Coach Track at the College Level

I love these beautiful women! I am proud to be their coach! ?#NSU

After graduating from LSU, Van Norman stayed close to the sport by becoming a coach in her own right and joining some of the top programs across the country.

Her 30 year career began at Rice University before she moved on to a stint at Georgia Tech and seven years as the head coach at Tulane University. While working with the Green Wave, Van Norman led the team to a whopping 44 Mideast Regional appearances.

Now, Van Norman has turned her coaching attention to the track and field squad at Nicholls State. 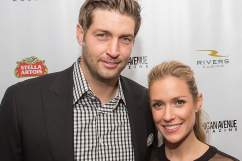 4. She Went Back to LSU to Receive Her Masters Degree

Van Norman went back to school to earn her master’s degree – while still coaching. (Instagram)

As if she wasn’t busy enough, coaching her own track and field teams and making the regular trek to MetLife Stadium to see Beckham play, Van Norman has also been focused on her own life.

Living in New Orleans, with her daughter Jasmyne, Van Norman somehow found time to earn her master’s degree in higher learning and sports administration from LSU. It’s a move that makes sense to those closes to Van Norman. She’s always tried to do what is best, not only for her family, but for herself. She told The Daily Globe in 2013:

I feel like I’m still a sponge. I think what I cherish and appreciate is the friends that I had (in Windom). I cherish my family, I cherish my mentors and that whole community and environment.

No wonder Beckham has frequently referred to his mother as his rock. Van Norman may not be the one producing Sunday-afternoon highlight reels on the football field, but she’s a major reason why Beckham is able to.

Keeping speed in the family, Van Norman married Derek Mills, an Olympic Gold medalist in the 1996 games. Mills ran as part of the United States 4X400 Relay and also appeared in the 1995 World Championship where he was ranked as high as No. 2 in the world the 400 meters.

Mills and Beckham have been close since the future NFL’er was just five years old and he’s regularly spotted on the sidelines during Giants games. Mills graduated from Georgia Tech where he ran track and earned his degree in electrical engineering.

Much like his wife, Mills hasn’t been able to completely turn away from the sport. He served as an assistant volunteer coach at Tulane. 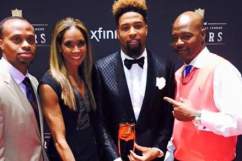