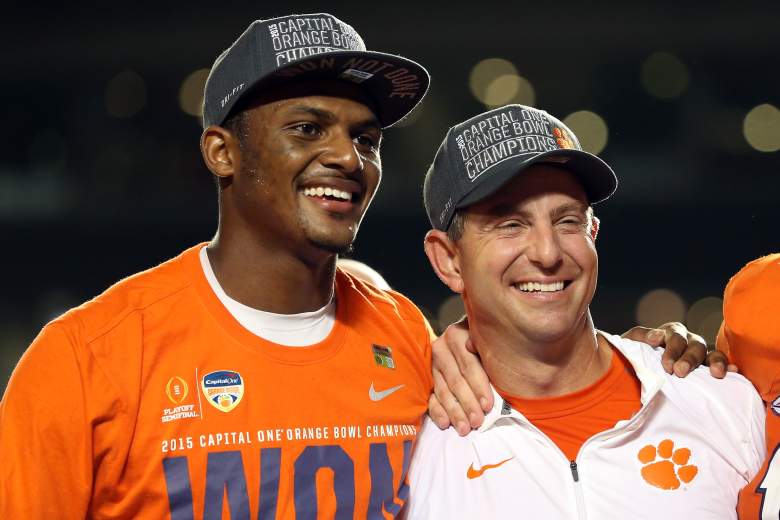 Clemson had a lot to smile about after their Orange Bowl victory. (Getty)

Clemson defeated Oklahoma in the Orange Bowl to advance to the national championship. They will face the winner of the Cotton Bowl between Alabama and Michigan State.

It was a dominant performance by the Clemson offense, especially their rushing attack. The Tigers defense was swarming and prevented the Sooners from gaining any momentum.

Here is how Clemson won the Orange Bowl:

Oklahoma Got Out to a Fast Start

The Sooners received the ball to open the game and drove down for a touchdown. Running back Samaje Perine had a short run into the endzone and it gave Oklahoma a 7-0 lead.

Clemson converted a fake punt that led to a touchdown early in the second quarter of the Orange Bowl. Fake punts are hard to pull off but this one had a special meaning. Just a month ago, Clemson coach Dabo Swinney went crazy after the same punter after he decided to go for a fake punt.

This one turned out much better for Clemson. DeShaun Watson scored the touchdown after the converted fake punt.

Oklahoma Responded With a Touchdown

Sooners back on top! This touchdown gave Oklahoma a 17-16 lead in a highly entertaining #OrangeBowl on ESPN. https://t.co/HxamUgXadr

Mayfield found his tight end, one of his favorite redzone targets, in the endzone to give Oklahoma a 17-16 lead just before halftime.

Clemson Dominated the Second Half

The Tigers took over the second half of the game. Clemson’s success was in large part because of their rushing attack. Early in the fourth quarter Clemson had rushed for over 300 yards.

Read More
College Football Playoff, Colllege Football, Football
Clemson defeated Oklahoma in the Orange Bowl and is headed to the national championship. We have all the details on how it happened.