Saturday night’s ‘The Battle for Brooklyn’ could have very well been dubbed the ‘Mugging for Brooklyn’ after Daniel Jacobs handed Peter Quillin his first pro defeat via a devastating first-round knockout, successfully retaining his WBA world middleweight title at Barclays Center in Brooklyn, New York.

“Speed kills, talent and skill,” said Jacobs after the fight. “I was patient and when  came with an uppercut I knew I hurt him and that’s when I went for the kill.”

Jacobs made the first move after a short feeling out period to start the bout and moved in behind a hard right that hurt Quillin, putting him against the ropes. Quillin was hurt. Jacobs smelled blood and went in for the kill, swarming the dazed Kid Chocolate, landing back forth with both hands. Quillin tried to make an escape, got caught with right hand, and it was good night. Watch:

“I was able to catch him with the right,” said Jacobs. “I saw his eyes and it looked like his equilibrium was off.   I’m not a referee, but if I was I probably would have still have him another opportunity.”

Daniel Jacobs, a 28-year-old cancer survivor, had last been in action with a second-round technical knockout victory over Sergio Mora in August. Prior to the Mora encounter Jacobs had stopped Caleb Truax in April, and in August of last year, he kayo’d Jarrod Fletcher.

Peter Quillin, a 32-year-old from Chicago but now fighting out of Brooklyn, had made his last ring appearance in September with a victory via KO over Australian prospect Michael Zerafa. Going into that fight, Quillin had fought to a draw versus Andy Lee in November of last year.

“I feel good,” said Quillin after the fight. “This is what happens in the game of boxing – sometimes you come up short.”

After a stoppage that many may consider premature, will fans see a Jacobs vs Quillin II in the near future?

“I definitely would give him a rematch,” said Jacobs “I’m willing to fight him next if that’s what the fans want.” 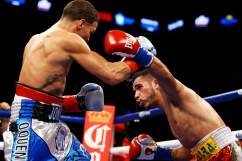