Thomas Rawls has been a breath of backfield fresh air for the Seahawks offense over the past few weeks. (Getty)

The perpetually injured Baltimore Ravens square off against the resurgent (and hard-hitting) Seattle Seahawks on Sunday afternoon in a game that was deemed such a lopsided matchup that it was actually flexed out of primetime.

So while backup quarterback Matt Schaub is expected to play in the Week 14 tilt, despite last week’s hard hits, the veteran might not be up to the task of breaking through the Seahawks defense.

Get all the details on the non-divisional matchup right here.

TV Channel: Locally broadcast on FOX with Thom Brennaman, Charles Davis and Tony Siragusa on the call. Click here to check and see if you fall within the coverage zone.

The Seattle Seahawks quarterback has been nothing short of dominant during his squad’s three-game win streak, tossing 11 touchdown passes and non interceptions over the course of the stretch. He’s also thrown for 879 yards as the Seahawks have outscored opponents 106-to-50 over the past few weeks.

“When he’s able to stay in the pocket, make his reads and deliver the ball like he’s been doing the last 12 quarters, he becomes so deadly because he still has the ability to get out of the pocket and work his magic. When he’s playing like this, it’s hard to say who’s better than him,” receiver Doug Baldwin said.

Wilson’s ability to jumpstart the offense has helped Seattle offset some serious injuries to its backfield, specifically the loss of running back Marshawn Lynch. His replacement Thomas Rawls has racked up 391 yards with three touchdowns over the last three weeks and now that defense have to respect Wilson as a pocket passer, it’s opened up the ground game as well.

Now, going up against a Baltimore defense that has the league’s fewest interceptions and second-worst turnover differential, the Seahawks offense is primed for a Sunday afternoon breakout. 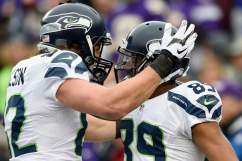