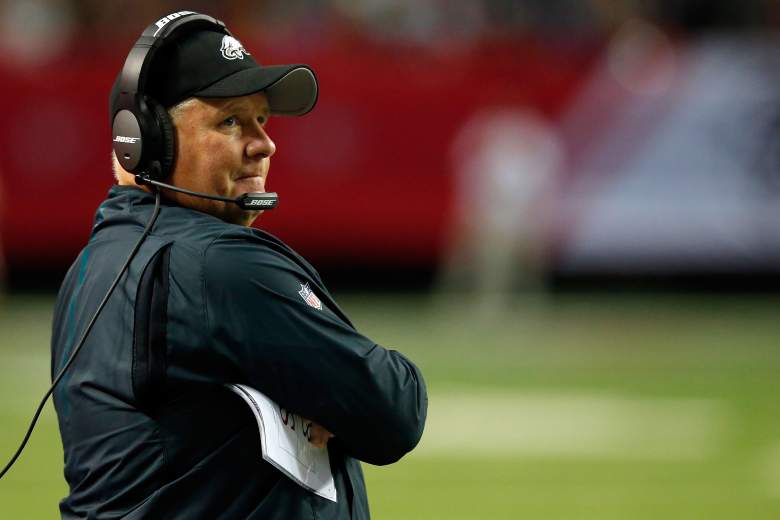 Chip Kelly is on his way to San Francisco. (Getty)

The search for a head coach in San Francisco is over, as is the search for former head Eagles coach Chip Kelly for a new job. The two sides are uniting, according to 49ers CEO Jed York’s Tweet on Thursday:

After a thorough search, Trent & I are thrilled to announce Chip Kelly as the new #HeadCoach of the @49ers

The 49ers will hold a news conference to introduce Kelly next week, according to ESPN.com.

Kelly joins the 49ers after three years with the Philadelphia Eagles. Kelly, who had a connection with Niners executive Tom Gamble, from Gamble’s Philly days, guided the Eagles to the playoffs once before being fired with one game remaining this past season. He was 26-21 overall in Philly.

ESPN.com reported that Adam Schefter had reported that the Niners had narrowed their head coaching search down to Kelly and coaching legend Mike Shanahan. Schefter also speculated that may be the reason they didn’t move on their previously widely presumed front-runner, Hue Jackson, who ended up signing on to be the Browns’ head man.

Now it's clear why SF never moved on Hue Jackson. Knew it had Chip Kelly waiting for Niners the whole time.

Kelly was given full personnel control in Philadelphia, but NBC Sports reports that Niners general manager Trent Baalke will pick the players in San Francisco, and Kelly will just serve to coach them. Terms of the Kelly deal with the 49ers are forthcoming.

There had been reports that although Kelly had been linked to several NFL jobs since the conclusion of the season, that some teams may be shying away from him due to what they deemed his “toxicity.” Heading to San Francisco seems to dispel that notion, at least for now.