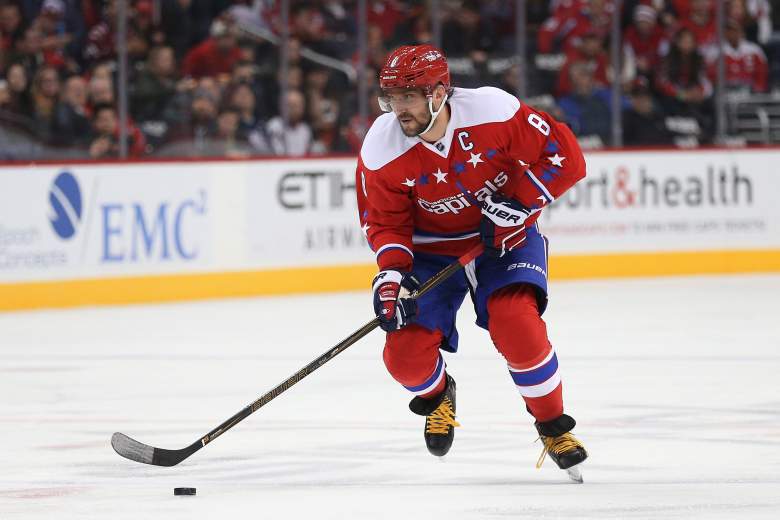 Alex Ovechkin will miss this weekend’s All-Star events with an injury. (Getty)

Alex Ovechkin (and his absurdly accurate shot) will miss this weekend’s NHL All-Star Game with a reported lower back injury. The Washington Capitals released a statement late Wednesday night, including an update from Caps general manager Brian MacLellan:

We made this difficult decision after taking into consideration what we felt was best for Alex and our organization. Alex has been an incredible ambassador for our team and the league, but we believe it is better if he uses this time to heal and ideally be completely healthy for the duration of the season.

Ovechkin’s status is officially listed as day-to-day, but due to NHL rules he will be required to sit out Washington’s February 2 game against Florida as well.

Of course, Ovechkin was not completely absent from TV screens during the storm. His interview with an D.C. area news team made the rounds on social media throughout the weekend:

The 30-year-old left wing has 28 goals, including 11 on the power play, and 14 assists in 46 games this season. According to Ovechkin he had been battling through the injury for several weeks.

“We talk about it maybe last couple weeks and last week it was very serious, should I go, should I not go,” he told the Washington Times. This would have been Ovechkin’s seventh All-Star game.

Evgeny Kuznetsov will serve as Ovechkin’s replacement in the game, while New York Islanders captain John Tavares has been named replacement captain of the Metropolitan Division.

Read More
Hockey, NHL
The Washington Capitals star, who was set to captain the Metro Division this weekend, will miss the All-Star Game with an injury.