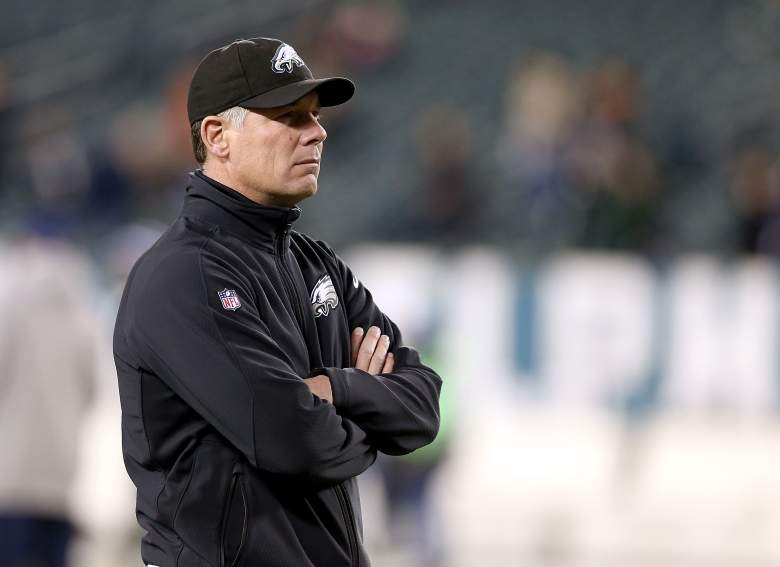 So, Chip Kelly is, officially out.

The Philadelphia Eagles officially announced that the team had parted ways with Kelly after, almost, three seasons of up-and-down performances and almost-there moments. While the move certainly wasn’t surprising (rumors of Kelly’s impending departure had been swirling all season), it did put Philadelphia in a particularly interesting position heading into the final game of the year; coach-less.

Currently in his 17th season in the NFL, Shurmur, 50, is in his second stint with the Eagles after returning to the program in 2013 as the team’s offensive coordinator. He had previously spent 10 seasons as the Eagles tight ends coach (1999-2001) and quarterbacks coach (2002-08). In 2014, Shurmur led an Eagles offense that broke the team’s all-time scoring record and set team records with 54 touchdowns, 390 completions, 4,581 passing yards, eight 300-yard passing games and 355 first downs.

Shurmur also has head coaching experience. He led the Cleveland Browns for one season from 2011-12.

Now, however, Shurmur faces and entirely new challenge and he hasn’t been shy about discussing the obstacles that the past few days have presented. He told ESPN:

It would be really silly for me to say yesterday was just a normal day. Let’s not call that normal. It felt to me a little bit like the first day after you cut down to the 53 [-man roster.] It’s a little bit weird. Some of the faces are not there. It started, in my opinion, a little slow. By the end, they were all ripping and roaring and it looked like a normal day.

Shurmur said he kept the Eagles practice schedule the same as it had been the rest of the season and added that he talked to Kelly after the firing. He’s also expected to make his first trip to the sidelines of the season this Sunday and will call plays against the Giants.

The veteran coach is focused on winning this game, looking for a little bit of momentum heading into the regular season and, perhaps, a preview of what he can do with the Eagles as head coach.

The rumor mill has already started to churn regarding Shurmur as a possible successor for Kelly and Philly.com has already made a strong argument for him. Of course, Shurmur maintained that his only concern was this Sunday’s game, saying he was “excited to help finish out this year,” but he already has at least one big-name supporter in his corner; DeMarco Murray.

The running back told Delaware Online:

Only time will tell whether Shurmur is the future of the Eagles, but he’s got a chance to make a quick impact on Sunday afternoon and a victory against a divisional opponent may be enough to at least warrant a second look.