Bill O’Brien has navigated distractions and QB problems to guide the Texans to a division crown. (Getty)

The Texans have rebounded from a 2-5 start and are AFC South champions. The team needed four quarterbacks to get the job done, but they will host the Chiefs in their opening playoff game next weekend.

Brian Hoyer has cleared concussion protocol, and is ready for his first postseason appearance. Hoyer’s a massive upgrade over Brandon Weeden, and his quick-release kept the Texans offense moving over the second half of the season. He’ll be feeding a healthy DeAndre Hopkins, who has had as good a season out wide as anybody in the NFL. In the backfield, Akeem Hunt is ready to burst onto the scene after earning carries from the practice squad.

On defense, the Texans have a front seven that can only be called underrated for so long. It’s not just Watt anymore, and Jadeveon Clowney should get his first chance to silence the doubters on his draft status on Wild Card Weekend. Brian Cushing is finally healthy for an entire season, and he has been an anchor in the middle. Oh, and Watt should start playing without the cast this week.

Am I getting too hype on the Texans? It’s possible. It was easy to fall for the same trap back in August, but now the Texans are one of 12 teams remaining. The Chiefs beat the Texans 27-20 in Week One, but both teams have matured since September.

The Chiefs may not have lost since October 18th, but they’ve had some close calls lately. They managed only 10 points against the Chargers, and eked out a 17-13 victory over Johnny Manziel and the Browns. The Chiefs may be hot, but they’re not invincible.

Here’s how the Texans fit into the final standings:

For more info on the NFL playoffs, click here. 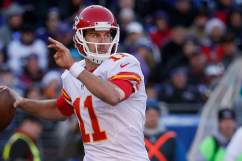