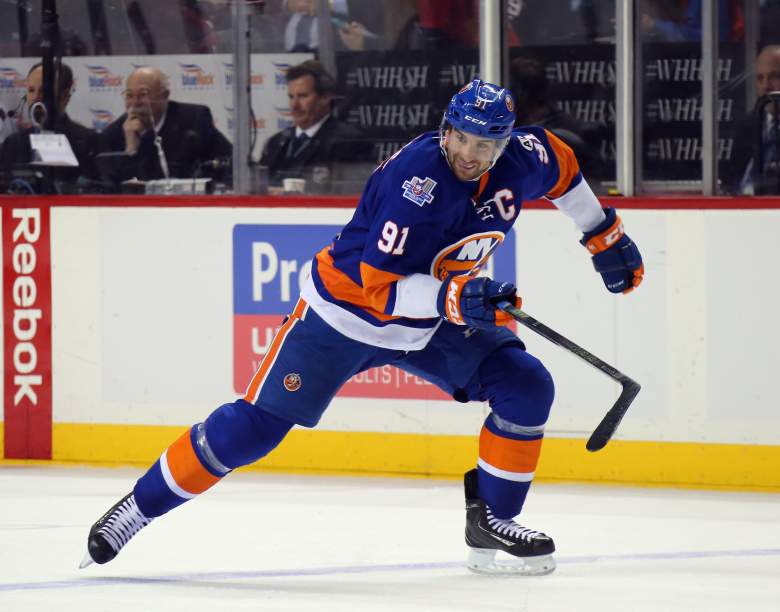 John Tavares will take over for Alex Ovechkin as captain for the Metro Division this weekend. (Getty)

If the craziness before the All-Star game is any indication, tonight’s matchup is going to be pretty darn entertaining.

In the past few weeks alone we’ve had everything from fan voting controversies to demoted (reinstated) captains and even a vague sense of, somehow, taking down the man. It’s been a lot to process. This game may also do something similar.

For the first time-ever the NHL All-Star game will be held in tournament form. We’ve got four teams, representing each division, battling in a 3-on-3 tournament. The winners of the first two games will face off in one final battle with $1 million on the line. It’s going to be fast paced, it’s going to be vaguely crazy and it’s, hopefully, going to be fun to watch.

Here’s everything you need to know about this year’s All-Star event.

Preview: Goalies, traditionally, aren’t the stars of an All-Star game. It’s like assuming that they’ll play defense in the NBA All-Star game or try to tackle particularly hard in the NFL Pro Bowl.

It just didn’t happen. That may change this year.

The 3-on-3 format of this year’s All-Star game has, whether they like it or not, thrown some of the league’s top-tier goalies into the midseason spotlight. So, does that mean the the All-Star netminders are preparing for the game any differently? No.

“It’s an All-Star Game. I’m not going to take it seriously,” Florida goalie Robert Luongo told the Associated Press. “I’m going to enjoy the weekend and have some fun trying to put on a show for the fans.”

Of course, NHL players and fans are fairly well acquainted with 3-on-3 action after the league moved to that format during OT this season. These three All-Star games, if the regular season is any indication, should be fairly wide open.

It’s also going to leave a lot of open space on the ice, giving these all-stars plenty of room to show off.

“You have to skate or you’re going to look brutal,” Buffalo’s Ryan O’Reilly said.