Dan Campbell hasn’t been ruled out to be the Dolphins coach in 2016. (Getty)

The Patriots have already clinched a first-round bye in the AFC playoffs, and can lock down home-field advantage with a win over the Dolphins. At 5-10 the Dolphins have been long removed from the playoff race, but Sunday’s game still holds meaning. The team will be looking for a new head coach this spring, and has roster decisions to make that could seriously affect the franchise.

Here’s everything you need to know about the final regular season game:

TV Channel: The game is being locally broadcast on CBS. Click here to see if you fall within the coverage zone.

Game Preview: Joe Philbin was on the hot seat entering the 2015 season, but it was a shock when he became the first NFL coach to be fired this season after just four weeks. Dan Campbell, who has never held a coordinator position at any level, was promoted to head coach and has led the team to a 4-8 record since then. Campbell is believed to be a potential candidate for the full-time job next season, making this game important for stating his case.

Should Campbell keep the job, he has a full offseason to prepare and shape both the roster and staff to his liking. It’s well-known Campbell would like the Dolphins to be built around running the football, and that would factor heavily into Lamar Miller’s offseason contract discussions.

On the defense, the Dolphins are paying out big money to it’s aging stars. Brent Grimes, whose wife Miko caused multiple media blowouts this season, is 33 and is in a non-guaranteed contract year. Cameron Wake, who is 34 and recovering from an Achilles tear, is also not guaranteed for 2016. By releasing both, the Dolphins could clear $15 million in cap space.

Then there’s Ryan Tannehill. The former eighth overall pick, Tannehill has regressed in his fourth NFL season. But he still has a chance to eclipse 4000 yards this season with a strong game Sunday, and is tied for the lowest interceptions total in his career. Whether it be Campbell or someone else, that person will have to decide if Tannehill is the guy for the Dolphins moving forward. 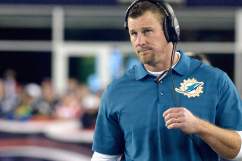