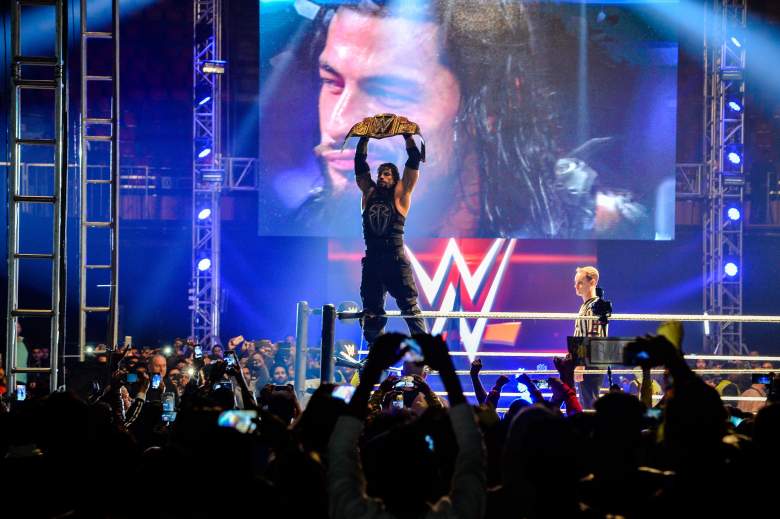 Roman Reigns has been at the top of the WWE world recently, but it’s taken him some time to get there. (Getty)

The Roman Reigns saga in the WWE ring this year has been nothing short of dramatic. It’s had its ups and downs and swings and, quite literal, punches to the face. It’s also been pretty fun to watch.

But while Reigns rise (and recent fall) as WWE World Heavyweight Champion has been the driving force behind the wrestling scene for several months, there’s quite a bit more to the man behind the character than many fans realize.

In fact, the man, born Leati Joseph Anoa’i, is a former professional football player, a star on the gridiron and a bit of a legacy in the wrestling field. He’s also a husband and, most importantly to him, a dad.

Now, as his character seeks a bit of in-ring revenge after losing his title in this year’s Royal Rumble, the man better known as Roman Reigns is just as fascinating in the real world as he is on TV. Get know him better right here:

1. Roman Reigns Comes From a Family of Successful Wrestlers

Roman Reigns grew up around wrestling and can count some of the biggest WWE stars as relatives. (Instagram)

Wrestling is in Roman Reigns’ blood.

The WWE superstar, who grew up in Pensacoloa, Florida, grew up around the sport. in fact, his father, Sika Anoa’i, and his brother, Rosey, were both professional wrestlers. Of course, Sika was a member of The Wild Samoans, winning the first World Tag Team Championship in 1980.

As a member of the Anoa’i family, Reigns is also related to former professional wreslters Yokozuna, Rikishi, Umaga, the Tona Kid and first cousins once-removed to The Usos and The Rock.

Reigns lineage has played a major part in his WWE career, including a reported frustration after Reigns did not end up with the WWE World Heavyweight Title after WrestleMania 31. A source told The Wrestling Observer Newsletter:

Sika forgot this business is not real life, and was legit pissed at the finish and looking to start a war. A lot of the younger (family members) were rallying around Sika, but the other 45 or 50 of them talked some reason.

Reigns, of course, would go on to win the Heavyweight Title in 2015, but now that he’s been stripped of the belt after Royal Rumble, it will be interesting to see how the family responds.

Charlotte & Becky Lynch: The Pictures You Need to See

2. He & Galina Joelle Becker Were Married in December 2014

The superman of #wwe with his family daughter Joelle and wife Galina Becker #RomanEmpire pic.twitter.com/4fvEotQdKZ

After years together, Reigns and his long-time girlfriend Galina Becker tied the knit in December 2014 in a beach-side ceremony. The pair had been together since they were both students at Georgia Tech and while Reigns now garners much of the athletic spotlight, he isn’t the only talent in this relationship.

Becker, who was born in San Jose, California, was a track and field standout at Georgia Tech, focusing on hurdles and triple jump. In the 2006-07 season she posted a season-best mark of 38’2.75” in the triple jump at the Auburn Tiger Classic and placed 13th in the ACC in the same event.

3. Roman Reigns Has One Daughter & the Pair Appeared in a PSA Together

Reigns is an incredibly hands-on dad and always focused on being the best father for JoJo. (Instagram)

While he’s always focused on his performance in the ring and with the WWE, the most important role Reigns will every play is father to his daughter Jeolle, who he calls JoJo .The now seven-year-old has been a major part of Reigns’ determination to climb the WWE ranks and she even joined him in a Father’s Day PSA in 2014.

Reigns has been very vocal about his devotion to his daughter, even discussing that relationship during an interview with the WWE, saying:

One of the lowest points I ever had in my life was right around the time she was born, so creating life helped my life. It gave me purpose. It’s all I care about. My little girl is my heart. That’s way more important than being a superstar to me.

Reigns made sure to honor his daughter when he won the WWE Heavweight title in December 2015 as well. Of course, that was fairly easy since it came on her birthday.

4. He Played College Football at Georgia Tech & Played One Season in the CFL

Although wrestling has always been a major part of his life, for a good chunk of his career, Reigns was actually focused on a different sport entirely; football.

Reigns played football for three years at Pensacola Catholic High School and was named Defensive Player of the Year by the Pensacola News Journal, before going on to play collegiality at Georgia Tech.

While at Georgia Tech, Reigns was a three-year starter at defensive tackle and a team captain during his senior season. He finished his career named to the first-team ACC team after recording 29 tackles for loss and 12 sacks.

Reigns went undrafted in 2007, but was signed by both the Minnesota Viking and Jacksonville Jaguars practice squads. He played professionally in the CFL for one season in 2008, competing with the Edmonton Eskimos. Reigns played in five games, starting in three, before he was released by the team on November 10, 2008 and subsequently retiring from football.

Perhaps one of the first things WWE fans notice about Roman Reigns are the extensive tattoos covering his entire right arm. While the design itself is impressive, it’s the meaning behind it that holds such significance for Reigns.

At first glance, the tattoo showcases Reigns’ strength and his power and while those are undeniable, there’s more to it than that. The former champion spoke about the meaning, in an interview with the WWE website, saying:

Reigns has a turtle tattoo on his wrist, a symbol of family, wellness, longevity and peach in Samoan culture. The ink is a representation of Regins’ dedication to his daughter and he added that, “my purpose in this world, as any father would say, is to protect her.” 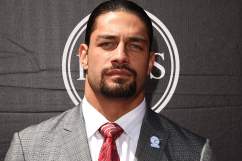 Who Is Roman Reigns’ Wife?

Read More
WWE, WWE Raw, WWE Smackdown
Roman Reigns has been a WWE wrestler since 2010, but there's much more to his story than the persona in the ring. Get to know the star here.