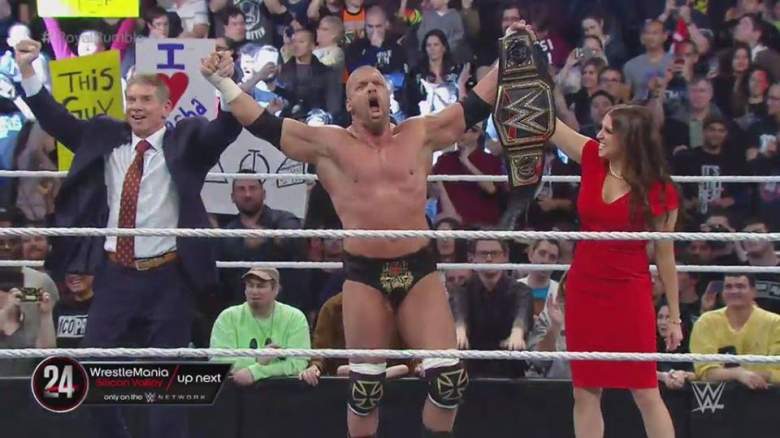 We’ve got all the best moments from Monday night’s RAW after the craziness that was Royal Rumble. The road to Wrestlemania is now and things are going to get a bit dramatic.

Read on for all the highlights from Florida:

The Authority Opened Things Up on Monday Night

"You're right, I don't need to be @WWE Champion. … I WANT to be WWE Champion!" – @TripleH #RAW pic.twitter.com/VUkOOZVdf8

As you’d expect, the Authority made its debut from the get-go on Monday night, relishing Triple H’s recently acquired WWE World Heavyweight Championship. It is essentially the early 2000s again. And it is fun.

Triple H showed up in the ring wearing a suit, his championship belt and proclaimed to the arena that he didn’t need to be champion, he wants to be champion because Roman Reigns doesn’t deserve the honor. So, we went there from the get-go. Also, Stephanie McMahon announced that we’ll learn the Fastlane main event to determine Triple H’s WrestleMania opponent by the end of the night.

Kevin Owens Defies the Laws of Humanity & Dominates His Match

In the first match of the night, Kevin Owens did not make sense. No way should he be able to stand up, let alone dominate an opponent like Dolph Ziggler.

…and yet. This happened:

That is a pop-up powerbomb for the win. This is the same guy who could barely walk down the ramp to participate in the Royal Rumble on Sunday after his absolutely brutal beatdown he took at the hands of Dean Ambrose.

After the Social Outcats called out Flo Rida in the stands, the rapper got into the ring and introduced The Dudley Boyz. This is about how it went:

Flo Rida even got in the mi a bit, flipping Slater back into the ring and leading to a slam from Bubba. Axel tried to charge in to get to D-Von, but instead meets a 3D and the match is over.

There was, unfortunately, no post-match rap.

Out with the old and in with the new.

After his surprise appearance during Sunday night’s Royal Rumble, AJ Styles made his RAW debut with a much-heralded matchup against Chris Jericho. And, well, it was actually pretty impressive.

Styles held his own against a Jericho that, lest we not forget, spent nearly 50 minutes into the Royal Rumble ring the night before. Somehow, Styles bounced back from this:

That made me happy. The fight to be the best never ends ?. #RAW

So, well, yeah, that happened.

After making a surprise appearance at Royal Rumble on Sunday night, Sasha Banks and Becky Lynch took to the ring and exchanged words before beginning their respective attacks.

They go at it. Becky Lynch looks like she’s wilting, but then, out of seemingly nowhere; Charlotte shows up. And she starts beating up on Becky Lynch who could really use a friend at this point:

Charlotte takes down both Beck and Sasha, showcases her Divas championship belt, is booed by the crowd and then walks away.

Bray Wyatt Continues to be Terrifying While Still Dominating

We will be the first to admit that Bray Wyatt kind of freaks us out a bit. That’s the point, but it had to be said. And Wyatt was particularly freaky in his RAW match against Kane.

Despite taking a beating from Kane in the early-stages of the match, Wyatt (and his family) broke out of every attack and, in the end, Sister Abigail was enough for the win.

The Wyatt family still terrifies us.

The Rock showed up. No, he wasn’t the one in the limo. That was The Miz. Instead, in true “Rock” fashion, the former WWE Superstar drove into the arena in his own truck and unleashed one of the best monologues we’ve seen in awhile.

The Rock is so absurdly charming, it’s almost not fair. It was fantastic.

Even more fantastic? The Rock is coming to Wrestlemania. Then, because sometimes the world is a wonderful we got a verbal showdown between The Rock and The New Day.

It almost doesn’t even matter that whole shtick lasted forever. It should have lasted the entire night. We would have watched.

The old friends teamed up for a big-time matchup against The League of Nations, particularly against Sheamus and Rusev.

We still don’t know how Dean Ambrose is functioning after Sunday’s Last Man Standing Match, but he might have actually been the MVP of this one.

After his hellacious night at #RoyalRumble, @TheDeanAmbrose is right back to throwing caution to the wind! #RAW https://t.co/1wbeoUkILc

In the end, though, it was Roman Reigns bringing the spear straight to Sheamus. Then, for good measure, and as a bit of payback for what went down during the Royal Rumble, Roman Reigns and Dean Ambrose joined forces to throw Rusev through a table. But, of course.

Last but not least, Stephanie McMahon returned, as promised, to announce the Fastlane main event, the winner of which will face off against Triple H in Wrestlemania. And this one is going to be fun. Check it out:

Have we all recovered from Royal Rumble?

That was, after all, pretty crazy. Let’s take a second to recap, shall we?

So, that’s about as short of a recap as possible when it comes to the Royal Rumble, but it’s enough to give us a bit of a basis heading into Monday night’s RAW. It also sets up some seriously good storylines for the next few weeks.

Of course, the focus of tonight’s RAW will be on brand-new WWE World Heavyweight Champion Triple H. Roman Reigns, undoubtedly, will feel like he got the short end of the metaphorical stick after the Vince McMahon-orchestrated attack by the League of Nations that kept him out of a good chunk of the Royal Rumble.

I can. I will. I did. I will again. #BelieveThat

And, while we’re on the topic of the League of Nations, expect the group to seek out some serious revenge against Kalisto after he grabbed back all the U.S. Championship momentum on Sunday night.

Also keep an eye out on Sasha Banks. There are already rumors circulating that she’s primed to become the next Divas Champion and after her appearance on Royal Rumble, she’s more than ready to join the Charlotte-Becky Lynch fray.

The Wyatt Family didn’t fare all too well in the Rumble and after their showdown with Brock Lesnar, it’s time for the group to move on to the next foe. The question remains, though, who?

Lastly, AJ Styles is primed to make a serious move in his RAW debut after stunning the fans during the Royal Rumble. The WWE needs some fresh talent in the ring and Styles appears to be the perfect option.

RAW airs at 8 p.m. ET on USA. Make sure to check back here throughout the night for the event’s best matches.

Read More
WWE, WWE Raw
So, the Royal Rumble happened. Now we've got to deal with the after effects. Check out the latest spoilers for tonight's Raw.