Paris Saint-Germain showed off their skill in the first leg against Chelsea, dominating possession but skating by with a 2-1 win. Much was made over PSG’s Ligue 1 dominance and the level of competition in France compared to England, but PSG quickly put that to bed with beautiful flowing play. Chelsea had their share of chances, but it was PSG who set the tone and applied the most pressure.

PSG opened the scoring in the first half, when Zlatan’s free kick took a tough deflection off Mikel and into goal. The lead didn’t last long, however, as Mikel was in the right spot off a corner to equalize for Chelsea just ten minutes later.

A draw at halftime was a win for Chelsea, and Guus Hiddink’s men continued to outperform expectations into the second half. Costa, Fabregas and Willian all had strong games, but the lack of quality at the back was too much to overcome.

The turning point came 70 minutes in, when Edinson Cavani came on for Lucas Moura. The Brazilian was having a great game, but Cavani was long overdue to see the field. It didn’t take long for the Argentine to make an impact, as Cavani beat the Chelsea line and nutmegged Courtois only minutes later for the winning goal.

The away goal for Chelsea is huge, and they’ll consider this a victory heading into the second leg at Stamford Bridge. For information on the return matchup, click here.

Scroll down for info and video highlights from throughout the match:

FULL TIME: PSG take the first leg vs. Chelsea with a 2-1 win!!! See you at Stamford Bridge for Round 2 #PSGCHE pic.twitter.com/hkolBCQruB

It didn’t take Cavani long to make an impact. The substitute made a great run past the back line, fielded a lobbed pass from Di Maria and struck a low shot near post past Courtois at a difficult angle.

Cavani. This PSG team is wonderful to watch. To have Cavani coming off the bench, what a luxury! #PSGCHE

Changes to both teams. PSG certainly have the more dangerous subs, but if the score holds many will wonder what took Laurent Blanc so long to get Cavani on the field.

Cavani replaces Lucas Moura. The winger has been a threat throughout. #PSGCHE

Chelsea are doing their best to stay alive, staying tight and blocking a blast from Blaise Matuidi. PSG corners are piling up, and Chelsea are once again struggling with possession.

64' Chance for PSG!! @Ibra_official header is cleared, as is @MATUIDIBlaise's follow-up shot from close range on the rebound!! #PSGCHE

A string of Chelsea bodies block Matuidi's close-range shot after a cross had fallen to the midfielder. #PSGCHE

Both teams are playing brilliantly. They both need to keep switched on defensively though! #PSGCHE

PSG have started he second half much like the first, pressuring Chelsea and getting shots on goal. The latest attempt was from di Maria, whose long attempt was tipped away by Courtois.

51' Chance for PSG!! Di Maria's long-range shot is deflected over the bar by a diving Courtois!! #PSGCHE

Chelsea answer back before halftime! Chelsea bring the pressure after a Willian free kick grants a corner, and a flick by Costa lands to the foot of Mikel.

Ibra strikes first as the PSG pressure finally causes Chelsea to break. Zlatan took a low shot on a free kick just outside the box, and the ball ricocheted off the wall into the opposite direction of Courtois.

Moura sends a cross right to the head of Zlatan, but he pushes it straight down and it bounces over the goal. Play opening up with almost 10 minutes until halftime.

Zlatan with a big chance, but he heads downwards and the ball bounces over the bar. PSG could do with getting a goal soon. #PSGCHE

Chance for Chelsea! Rahman sends a header into Costa, who looked to have scored if not for an incredible save from Kevin Trapp. The PSG Keeper got just enough to send the ball over the crossbar, and PSG were able to clear the danger.

What a save from Kevin Trapp to deny Chelsea taking the lead! #PSGCHEpic.twitter.com/9DvnlUkPmO

I've been a major critic of Kevin Trapp this term but that's a reaction stop from a Diego Costa header. Best thing I've seen him do. #PSGCHE

So, so close. And while PSG may have had most of the possession it was the Blues who created the first clear opening. #PSGCHE

First booking of the night, as Ibra slides into Mikel and is shown a yellow card.

Why would anyone ever waste a card-worthy tackle on Mikel? #PSGCHE

First yellow card of the night goes to Zlatan for a foul on Mikel. Looked like a very soft decision. #PSGCHE #UCL

Chelsea are struggling to hold possession, and Parc des Princes is rocking. Twitter agrees that Chelsea can only keep playing like this for so long:

To keep it 0-0 after a manic 15 minutes, Chelsea has weathered the storm against PSG. Well, the first of several storms. #PSGCHE

Chelsea look so lost here. It's like their players are waiting for the bus that they were originally planning to park. #PSGCHE

I've already lost count of PSG overloads in the middle to find a free man. Chelsea making no attempt to counter it #PSGCHE

PSG have looked dominant in the opening minutes, controlling possession and making Courtois work. Chelsea are in trouble early.

The teams are out on the pitch in Paris! #PSGCHE #UCL pic.twitter.com/WhjQCygvtI

One hour until kickoff, and lineups are out. It’s a makeshift back line for Chelsea, with American Matt Miazaga making his Champions League debut as a substitute. Click here to see full lineups for both teams. 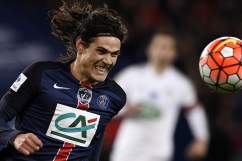 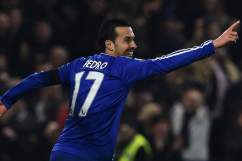