Sexual harassment allegations made against Denver Broncos quarterback Peyton Manning during his time at the University of Tennessee are back in the spotlight once again.

Dr. Jamie Naughright, then an athletic trainer at the university, accused Manning of “forcefully” maneuvering his naked testicles and rectum directly over her, with his penis on her head, while she examined him in 1996, according to court documents. Naughright says she was disgusted and pushed Manning away.

With sexual harassment and assault accusations against celebrities and other powerful figures, ranging from Hollywood producer Harvey Weinstein to ex-Fox News host Bill O’Reilly to journalist Mark Halperin gaining attention nationwide, Naughright sat down for an interview with Inside Edition. It will air Monday night in her first TV appearance since she made the accusation 21 years ago.

The accusations last made headlines in February 2016 after a report by the New York Daily News’ Shaun King was published. King’s report focuses on court documents from a 2003 lawsuit filed against the Mannings in Florida.

Here’s what you need to know about Naughright:

1. She Is a New Jersey Native, Tennessee Graduate & Worked as her Alma Mater’s Director of Health & Wellness

Jamie Naughright, now 47 and living in Florida, was raised in Hackettstown, New Jersey. According to NJ.com, her father, James Naughright, was the owner and butcher of a Long Valley general store and a 43-year member of the Long Valley Fire Department, including three years as its chief.

Naughright was married and went by the name Jamie Whited in 1996 when the Manning incident allegedly occurred, according to the court documents published by the Daily News.

She was working as the Director of Health and Wellness for the men’s athletic program, which included working as a trainer for the men’s football team while Peyton Manning was a quarterback for the Volunteers.

According to the court documents, the Manning incident occurred on February 29, when she was examining the star quarterback for a possible stress fracture in his foot. Manning initially denied putting his penis and testicles in Naughright’s face.

Her boss, Mike Rollo, later claimed Manning was actually pulling his pants down to moon another player, Malcolm Saxon, but according to Saxon, that never happened.

“Peyton, you messed up. I still don’t know why you dropped your drawers,” Saxon wrote in a letter to Manning, which was included in the court documents. “Maybe it was a mistake, maybe not. But it was definitely inappropriate. Please take some personal responsibility here and own up to what you did. I never understood why you didn’t admit to it….”

2. Naughright Told Inside Edition She Was ‘Scared’ & ‘Intimidated’ During the Incident With Manning

“I was repulsed. I was scared. I was intimidated,” Naughright said in the interview. “It was definitely a predator, intimidating anger violent eyes he had.”

Inside Edition obtained Manning’s video deposition from a 2003 lawsuit after Naughright sued him for defamation.

“I briefly pulled down my pants to so-called ‘moon’ him. One second, one and a half seconds,” he said in the deposition, according to Inside Edition. “Pulled my pants back up and continued with Jamie examining my foot.”

Manning’s attorney told Inside Edition, “Peyton Manning has been absolutely clear: Jamie Naughright’s accusations are false. When her claims were first investigated 21 years ago, she told a very different story. Her current account was invented several years later in connection with her first of several groundless litigations against Peyton. Most recently, she left Peyton’s mother a vulgar and extremely disturbing voicemail. Ms. Naughright should stop this abusive behavior.”

In response, Naughright said, “I have not changed my story. This is another failed attempt to discredit and smear the victim. The EEOC complaint was a working document which was filed on the last day of the statute of limitations. I have consistently and truthfully described the assault as sexual and physical.”

3. She Settled a Sexual Harassment Lawsuit With the University for $300,000

Naughright eventually left the University of Tennessee after settling a sexual harassment lawsuit with the school in 1997, according to an Associated Press article from the time. The lawsuit was settled for $300,000.

According to the article, Naughright’s lawsuit also included several other allegations dating back to 1990. She made 33 claims against athletes, trainers, coaches and administrators, and at least four were confirmed by an investigation by school officials.

But the university also claimed Naughright, who was then going by her married name, Jamie Whited, “shared responsibility” in the harassment.

“Ms. Whited often sent mixed messages about matters complained of in her allegations in that she herself exhibited similar behavior or did not make clear that she found particular conduct to be offensive,” the report said. “Likewise, the Athletics Department administration could have avoided some problems by more clearly conveying to Ms. Whited the basis for actions she considered to be discriminatory.”

The university said Naughright often used profanity “to prove that she was one of the boys.”

According to the AP report:

She also said she was the subject of a song with sexual innuendo sung by the track team, had student trainers barge into a storage room where she changed clothes and received warnings that ‘other athletes were referring to me in a sexual manner and that I should be concerned for my safety.’

Naughright also said she was embarrassed by the nickname given to her, “Bumper,” which she said referred to her breast size.

4. She Claimed She Lost Her Job Because Peyton & Archie Manning Called Her ‘Vulgar’ in a Book They Co-Wrote

Naughright also settled a lawsuit with Peyton and Archie Manning, which she filed in Florida court after she was mentioned in a book they wrote in 2001. The terms of the settlement weren’t released.

Documents from that lawsuit are the basis of Shaun King’s New York Daily News report.

You can read the documents below:

In the book, the Mannings claim she was “vulgar” when working with the football team, but other players and colleagues denied that.

Naughright was working at Florida Southern College at the time and said she lost her job because of the book.

5. She Sued Donna Karan After She Was Injured by a Physical Therapist in the Fashion Designer’s Bedroom

Naughright sued fashion designer Donna Karan Weiss in 2010, claiming she suffered a herniated disc in her spine and a broken jaw while receiving treatment from a physical therapist in the designer’s bedroom, the Courthouse News Service reported.

She said Stephen Robbins, whom she called a “quack,” was recommended by Karan, who had set-up her bedroom to look like a physical therapy room for the treatment.

“Robbins violently and repeatedly twisted her head and neck causing, among other injuries the herniation of at least one cervical disc, the bilateral fracture of her mandibular joint, and harm to the auditory canal, as well as other personal injury and damage too numerous to mention here,” according to the lawsuit.

The outcome of the lawsuit was not immediately available. 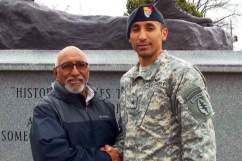